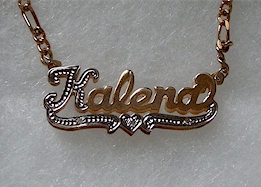 So my friend Jane laid down the 7 things meme gauntlet this week and tagged me in her blog post (grrrr, you’ll keep Flora ;-).

The idea is to tell 7 interesting or unusual things about yourself that others may not know. I’m not one to back down from a challenge, so here we go:

1) From the time I was 8 (in a failed attempt to impress my father), I decided that I wanted to be a journalist. All my studies and subject decisions from that point on revolved around this goal. In 1989 after completing a communications degree, I finally got a cadetship at a local paper and spent the next six months working my butt off for crap wages and a sleazy boss who wanted me to scoop the competition even if I had to treat people like shit to do it. I hated every second and decided journalism wasn’t for me.

2) I met my American husband in a chat room on the Internet in 1996 and flew from Sydney to meet him in LA. Back then, Internet relationships were considered strange and my friends and family thought I was either the bravest person they knew, or nuts.

3) I worked for the Government of Thailand in their Sydney office for nearly six years. If I’d worked another two weeks with them I would have received The Order of the White Elephant, a special honor granted by the King of Thailand to long-time government employees. But I digress. In this gig for the Thai Government, I accompanied a lot of trade missions to Thailand. During one visit to Chiang Mai, we were at a restaurant and were all presented with opium cigarettes by a member of the Royal Family. My boss told me we were expected to smoke them in front of him as a sign of respect. Only one problem, I don’t smoke tobacco, let alone anything heavier. I pretended to light mine and then smuggled it out of the restaurant in a coat pocket. Back in Sydney two weeks later, I found the cigarette intact and realized I had carried it in my pocket through 3 airports and on 3 planes without detection.

4) I’ve been on two game shows on Australian TV. The first was Wheel of Fortune when I was 18 and I was flown to Adelaide from Sydney for the show taping. It was my first plane flight and I was scared to death. I won a Garfield phone, a pen and $50 worth of socks. My second game show experience happened in 1999 and was called Catch Phrase. I was carry over champ for 7 nights and won AUD 26,000 worth of cash and prizes, including a memorable trip to Noumea, but I failed to win the major prize (a car). Having to guess word puzzles after 9 hours of taping without food may have had something to do with it.

5) I am a keen geocacher. I only discovered the sport last month but have already become obsessed. It combines one of my favorite pastimes, hiking, with my 4 year old son’s favorite pastime, treaure hunting. Living in New Zealand, it’s the perfect excuse to get away from the PC, spend more time with my son and see more of this amazing, scenic country that we call home.

6) I absolutely love thunderstorms. I don’t know what it is about them, but I get ridiculously excited when I sense one coming. I like nothing better than to park myself in front of a big picture window and watch nature’s free concert – the more thunder, lightning and noise the better. So it’s not surprising that the freakiest thing that happened to me involved a storm. My husband and I were driving on a country road in NSW, Australia when everything got very still and the sky turned orange. I knew a big storm was coming and said that I hoped we wouldn’t be stuck in hail before we got home. Next thing, I hear a huge *CRACK*, see sparks and smell smoke simultaneously. Then a massive tree branch literally flew into the air from my right and landed about two metres in front of our car. Luckily we had disc brakes and I was able to pull up just before we hit it. Lightning had hit a large eucalypt on our right and split the tree in half. I swear my heartbeat didn’t slow down for about 24 hours. We found out later that lightning strikes from the same storm killed 30 cows from a nearby farm.

So that’s me done. Now for the fun part. I get to tag others for the same meme: