If you were given the task of coming up with an idea for raising money for your favorite charity, using only your influence to fund the idea, what would YOU do?

Here’s what Evan Carmichael decided to do. He took the popular hobby of baseball card collecting and leveraged his connections with 33 leading bloggers to create the Entrepreneur Heroes Trading Card series to raise money for Kiva.

Evan asked 33 top bloggers to name their favorite entrepreneur and provide a reason why they inspired them. The result is a unique collection of trading cards featuring famous entrepreneurs such as: 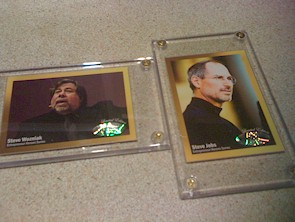 Each card has a picture of the entrepreneur on the front, with some facts and a quote from them on the back, together with a quote from the blogger who nominated them. Featured bloggers include people like Danny Sullivan, Guy Kawasaki, Darren Rowse, Tim Ferriss, Chris Brogan and Tom Peters.  Evan and his team have produced a very collectable set of trading cards for exchange at conferences, events or just to add to own your private collection.

Profits from the sale of the cards will go to support entrepreneurs in Africa through micro-lending organization Kiva. To date, over 825 new business owners in Africa have been helped through the efforts of Evan Carmichael and his team.

The Entrepreneur Heroes trading cards officially go on sale tomorrow. But you can pre-order your packs today and save 20% off the regular price – only $3.95 per pack of 5 cards instead of $4.95.  There’s free shipping if you order three packs or more, plus you’ll receive a limited edition gold hologram Steve Jobs or Steve Wozniak card for every three pack pre-order. There’s also a chance to win a baseball signed by Steve Wozniak.

As an Evan Carmichael Elite Author, I’ve been given 12 limited edition, perspex-framed, hologram Steve_Jobs and Steve Wozniak cards (pictured) to give away. In order to win one, please tweet about which Kiva entrepreneur you think deserves support, making sure to include @kiva and @kalena somewhere in your tweet. For example:

“Hey @kalena, I think @kiva entrepreneur Evelyn Paquino deserves support because she is providing a valuable service to her community.”

Every day for 12 days starting 1 April, I’ll choose a winner and post out a limited edition trading card.

Did you know it’s only 3 weeks to go until the SMX Sydney Conference? If you’re unfamiliar with the event, basically it’s the biggest search marketing conference in Australia and it’s held every year. This year it’s on 22 and 23 April at a new venue – The Sydney Hilton.

The agenda’s shaping up nicely and there are some must-see speakers attending this year, including:

And of course the most important reason to attend is the free Search Engine College tshirt you’ll receive with your registration pack. Oh and one lucky attendee will win an iPad. Whatever that is (wink wink).

I’ll be live blogging as many sessions as I can and scoffing down pink drinks during all the networking events, as is the SMX tradition. Wanna join me? Register now!

As Search Engine College is sponsoring the event, I have a free 2 day conference pass to give away so stay tuned to the blog for details on how to win that.

I’ve been looking at purchasing a good SEO tool. Have been looking at WebCeo and Internet Business Promoter. What is your opinion of these, are they worth the price tags? (Looks like they scan entire webpages, spot problems, and suggest solutions).

Or do you have any good suggestions?

No tool will do the SEO for you. But some tools can speed up the SEO process by providing information about a page such as:

Some tools can also save you a lot of time by looking up the Search Engine Results Pages (SERPs) for a variety of search engines and showing you the keyword rank for a particular page on those SERPs.

I haven’t reviewed WebCEO or IBP for a number of years, so I can’t comment on those. But I recently had the opportunity of reviewing the following tools and can recommend them:

At the recent SXSW Conference, Twitter Co Founder Ev Williams announced a major framework they have in the pipeline called @anywhere.

The idea sprouted from the difficulty people have when they browse web sites and want to follow particular persons or businesses they come across on Twitter. At the moment, if you want to do this, unless there is an obvious “Follow me on Twitter” link, you need to conduct a search for the person or business on Twitter, locate their account and then login to your Twitter account to add them.

“Soon, sites many of us visit every day will be able to recreate these open, engaging interactions providing a new layer of value for visitors without sending them to Twitter.com…

Participating site owners won’t need an API to make this happen either – apparently @anywhere will run via a few lines of javascript added to their HTML code. Already, 13 of the biggest web players have signed up for @anywhere, including sites like Amazon, Bing, Yahoo! and YouTube.

No launch date has been announced yet, but Twitter’s blog hints it will be *soon*.

We are developing a site using Joomla. The site is all about to show latest news i.e. the News Portal. But we don’t know how other sites are showing news on their news portal. How can we use RSS feed of other sites to show news on own News Portal and how can we used for SEO?

Using an RSS feed (or even a number of them) on your site can be a simple and effective way to get new and dynamic content.  In some cases you may have some control over the content in the feed (by specifying a keyword in a Google news feed for example), so this can be perfect for providing content about a particular niche or topic area.  In most cases however you will be dependant on the content of the feed, so you would need to choose which feeds to use fairly carefully to ensure that they are relevant to your site, and your site visitors.

Fortunately, the addition of an RSS feed to your site is pretty straightforward – particularly under Joomla, as there are a bunch of extensions already available for you to choose from.  Try a Google search for “Joomla RSS” or simply check out this link for Joomla RSS Readers and you will find plenty to choose from.  Many of these will do the job for you, some will have more features than others, so just browse through them until you find one that meets your specific needs.

From an SEO perspective, simply adding a feed or two to your site may not help you a great deal – because although the content may be keyword targeted and relevant to your site, it is still essentially duplicate content.  You could consider getting a bit smarter about the feeds you use though.  Using tools like Yahoo Pipes you can gather feeds from multiple sources, manipulate them, merge them, reorder them, and generate your own customised feed, which. when displayed on your site, may be considered new content by the search spiders.