I awoke to a nice surprise in my email in-box on day 12. The email subject line read “Congratulations – Your Proposal was Chosen”. Turns out I had won my first Elance gig!

The female intimate apparel company had decided my skills met the brief and had chosen my proposal over more than 20 others. The relief at having two months of guaranteed income was immense. 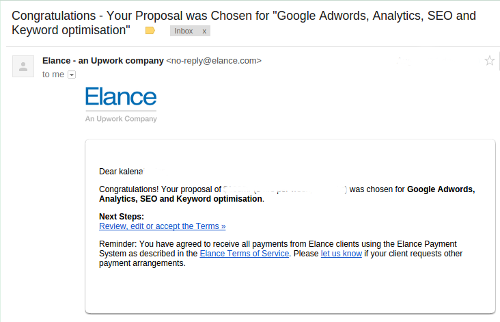 But at the same time, I was a bit nervous about the whole Elance process. Having already been bitten by a dodgy vendor, I had also been reading some horror stories about freelancers being ripped off and being powerless to fight back.

According to Elance, as long as I used their Work View system – utilizing their built-in time tracking software Tracker – and submitted time-sheets on time I would be protected and paid. With Work View, Elance documents your work in real time as it progresses. While you have it switched on, the Tracker software takes screen-shots of your desktop at random intervals and posts them to the Work View section of the Elance Workroom. Clients can view the work and provide input and comments. What could possibly go wrong?

The information captured with Tracker is then used to automatically generate detailed time-sheets and you submit them at the end of the week with additional project notes if needed. Elance generates an invoice to the client and provided the client has AutoPay set up, payment is automatically made by Elance to the freelancer 7 days later. The idea is that clients can verify they are paying only for hours worked (rather than your online erotica habit) and the freelancer is guaranteed of payment.

There have been quite a few complaints by freelancers about Work View being invasive and inaccurate so I was wary. But – privacy concerns aside – I wasn’t about to turn down my first official Elance gig. So I accepted the terms of the project and downloaded the Tracker software installer.

Because Tracker runs on Adobe Air and because Adobe have dropped support for Linux – even though the majority of programming gigs on Elance are Open Source based – installing the Tracker software on Linux was a minefield of complication and head slamming frustration. An hour later I finally found the solution, but I still had to jump several hurdles and create my own exe script before my Ubuntu Terminal would play nice.

The next step was to nominate a payment method. I could choose from being paid into my PayPal account or via wire transfer into my nominated bank account. Not wanting to poke the sleeping IRD monster with a stick, I chose the latter. Elance informed me that there was a 5 day waiting period for my account to be verified, but apart from that, I was finally ready for my first paying gig.