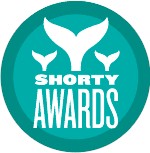 If you’re a Twitter fan, you probably already know that the second annual Shorty Awards are underway. If not, then let me explain.

The Shorty Awards are a celebration of excellent Twitter content, as voted by the community. Voting is now open in 27 official categories such as tech, humor, weird, government, news and art, but votes are also being accepted in unofficial, crowd-sourced categories.

“I nominate @TwitterUser for a Shorty Award in #category because… (add reason here).”

You can do this on Twitter.com, with any Twitter client, or using the voting box on the Shorty Award site.

In February, the nominees will be narrowed down to five finalists in each category, with winners determined by a combination of popular vote and by the members of the Real-Time Academy of Short Form Arts & Sciences. In March, an awards ceremony, complete with 140-character acceptance speeches, will be held in New York City and live streamed on the web.

If you missed out on a Shorty last year, never fear. You’ve got the whole of January to garner votes and topple the early leaders.

In the past, I made sure I was not logged in to Google when I checked my Client website standings in search. But, now are we going to have to clear *Web History* and Disable customizations every time we want to check our client’s rankings manually?

This article claims that Google’s new ‘cookie’ extends Personalized Results to All Users. Here’s a quote:  “Google has begun using a cookie placed on users’ machines to track their search behavior and offer personalized recommendations, even when they are not logged into a Google account.”

It’s true that Google have extended Personalized Search to all users, whether they’re signed in or signed out of a Google account. But you can turn history-based customization off – both temporarily and permanently. The method of turning it off differs depending on whether you’re logged in or out of Google, but in both cases the instructions are very simple.

Probably the easiest thing is to run your searches as normal and check to see if the SERPs you’re seeing have been customized based on personalization. As per Google’s official blog post:

“You’ll know when we customize results because a “View customizations” link will appear on the top right of the search results page. Clicking the link will let you see how we’ve customized your results and also let you turn off this type of customization.”

You can then choose to view the same SERPs without customization to ensure you know how the results look to persons who have opted out of personalized SERPs. But keep in mind that personalization has been in place since 2005 and SERPs all look slightly different to everybody.

There’s really no such thing as a consistent SERP in Google so traditional *rankings* are somewhat meaningless today. I know that’s sometimes a difficult thing to explain to a client, but it’s true! 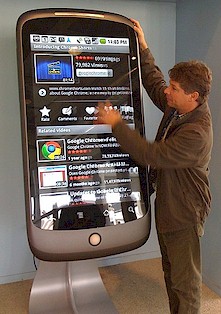 Google is no longer a search company.

That’s right – the launch of an online mobile store yesterday to sell their new smart phone means Google has crossed the threshold from search company to consumer electronics retailer.

The Nexus One was officially revealed at a press conference at Google headquarters in Mountain View yesterday, but details about the handset had already been leaked and available on the web for weeks. Referred to by Google staff as a *Super Phone*, the Nexus One is being touted as an iPhone killer and has been designed specifically for Google’s Open Source Android operating system.

While the Nexus One does look very much like an iPhone, the first difference that strikes me is the trackball. How very IBM ThinkPad. It also features a thinner profile at 11.5mm, a 5 megapixel camera, 2 microphones (one for noise cancellation), a 3.7″ OLED touchscreen display and the handset weighs in at a tiny 130 grams. Comparisons to the HTC Droid Eris phone are no coincidence – HTC manufactured the Nexus One.

Another gloatworthy, geek-pleasing feature that the Nexus has over the iPhone is the voice-activated keyboard, which I noticed a few launch attendees testing today on Twitter, with amusing results. For more details about the launch I recommend Danny Sullivan’s live blog coverage.

To coincide with the launch, Google installed the world’s largest Nexus One in their foyer (see photo). While it’s not an actual working phone, it’s still pretty impressive.

US customers can now buy the Nexus One directly from Google’s web store with a two-year contract with T-Mobile USA for US $179 or the unlocked handset for $529. Vodafone will supply Europe, Hong Kong and Singapore with the Nexus soon.

Google expects it to roll out to other countries and carriers within the coming months.

Using a special animated logo, Google has paid tribute today to the English physicist, mathematician and astronomer Sir Isaac Newton who was born on this day in 1643.

It’s widely recorded that Newton *discovered* the concept of gravity (and the resulting science of physics) as a result of observing apples falling from a tree. In tribute, the drop apple theme is mimicked on Google’s global Home Page today.

The Google logo is partly obscured by the branch of an apple tree. After a second or so, an apple drops from the branch to the bottom of the home page. It’s unusual for Google to create an animated tribute Doodle and it makes a nice change from the static images. See the logo in action below:

Clicking on the logo takes you to SERPs for the search query “Isaac Newton”.