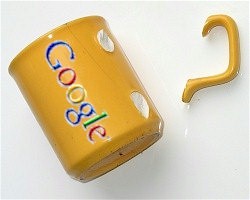 So I have been waiting for Google Checkout to become available to merchants Down Under for a long time now.

Every time I spot a Google representative at a Search Conference in Australia or New Zealand, I take the opportunity to ask them publicly “Where the bloody hell is my Google Checkout merchant account?” So far, the answer has ALWAYS been the same: “We can’t give you any information about that”.

This year’s SMX Sydney conference was no different. Frederick Vallaeys, Product Evangelist for Google Adwords came to Australia to hold a session about the new Google AdWords ad formats. After listening patiently to Frederick, I raised my hand to ask a question and was handed the mic.

“When are you going to make Google Checkout available to merchants in Australia and New Zealand?”

An expectant hush came over the room. Frederick thought carefully for a moment and then said “I’ll have to get back to you on that. Please come and see me at the end of the session”.

After the session, I packed up my laptop and headed up to the table of speakers. And…. Frederick was gone. Thankfully, Greg Grothaus from Google’s web spam team was still there and somewhat reluctantly took my card to give to Frederick. On the back I wrote my burning question. Again.

So fast forward two weeks after the conference. I received an email from Frederick with the subject line: Google Checkout in Australia. “Promising!” I told myself. But alas, his email read:

“Greg passed on your card to me. I believe you asked about Google Checkout coming to Australia?

Consumers in Australia can already use Checkout to pay for things. As for allowing Australian merchants to accept payments by Checkout, we don’t have any timelines we can share about that.

Sorry I can’t provide you with a more specific answer…

Look, I don’t complain about Google very often. Marvellous company. Brilliant people. Handy little search tool. I’m delighted that Frederick took the time to answer me personally. BUT, surely somebody, somewhere in the Googleplex can give me and other AU/NZ merchants in waiting a straight answer about this matter? It’s been 3 years since I began asking.

Where the bloody hell are ya, Google Checkout?

[Editor Update 1 : If you’re an Aussie or Kiwi merchant and would like to know where the bloody hell YOUR  Google Checkout account is, please comment on this post, or better still, make your feelings known to Google Down Under on Twitter and copy me in via @kalena]

[Editor Update 2 : Thanks to those of you who contacted Google Down Under to ask about Google Checkout for merchants Down Under. I’ve had a response from them: “…we want paid apps for devs too but it takes a while to roll this out, we don’t have a timeline for this yet“. Aaaaarrrggghhh! ]