As soon as I laid eyes on today’s Google Doodle I knew it was going to be my favorite so far. I’m a huge Star Trek fan, so my heart started racing when I typed in Google.com and recognized the familiar uniforms from the Starship Enterprise adorning the letters in the GOOGLE logo. But it’s a far cry from your regular doodle. Today’s Google Doodle is a fully interactive game of sorts.

To mark the 46th anniversary of the iconic TV series Star Trek, Google has put together a really fun commemorative doodle. Ryan Germick, Google doodler and keen Trekkie, led a team of animators to create the multi-scene Star Trek animation to celebrate the show’s launch 46 years ago. 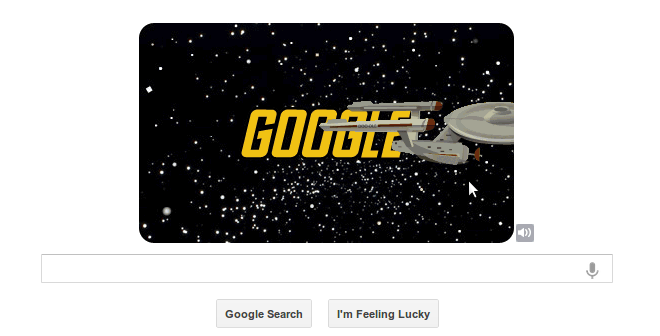 My initial delight in spotting the doodle grew as I discovered the incorporated interactive elements. Clicking on highlighted areas of the Google logo triggers a series of tributes to iconic Star Trek episodes, including “The Trouble With Tribbles” and pilot episode “The Man Trap”, which aired on Sept. 8, 1966. Various letters from the Google logo play the crew of the starship Enterprise. Captain James T. Kirk is played by the central “o” in Google.

There are a few different scenes with various highlighted areas you can click on to make the scene play out. My favorite is the tribbles hiding in the ceiling of the Transporter Room. How many others can you find? After the final animation plays out, Google redirects you to search results for Star Trek the Original Series.

I declare this to be Google’s Best Doodle Ever!  You can watch a full video of the interactions below :