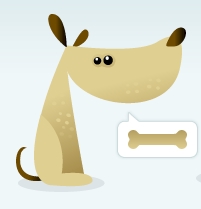 Have you heard of Yahoo Meme? The new microblogging site was soft-launched in Portuguese in May by invitation only and according to TechCrunch, Yahoo has just launched a Spanish version.

Meme’s mascot is a cartoon dog. Not quite as cute as the Twitter bird but close enough.

With Yahoo launching Meme to the Spanish speaking market, it seems they are getting closer to building a potential rival to Twitter.

We recently moved from a custom CMS system to Expression Engine. Overall I like it, though we have seen a bit of a drop in Google referrals despite keeping the design and layout of our pages (largely) the same. One thing I noticed is that previously all our individual article pages ended in ‘.html’ or ‘.shtml’ whereas with the new CMS they all just end in a slash. So my question: does Google give priority to content that ends with a ‘known’ HTML ending like .html or .shtml, or doesn’t it care? – Dave

The Search Engines won’t give a ranking preference on the basis of the filename or URL. Whether it is a .html, a .php an .asp or even a .pdf doesn’t matter – as long as they are able to crawl, and index your pages, the extension (or lack thereof) is irrelevant.

However, it sounds to me like although you say that the design and layout of you pages is much the same – the names of those pages (i.e. the URL used to access the page) has changed.  This is quite a common issue when switching CMSs, and unless you are careful, you can lose much of the credibility (and hard earned rankings) achieved by your old site.

If any of the pages in your new site have a different URL – they will NOT show up in Search Results until they have been re-crawled and indexed by the search engines.

To check to see which pages on your site have been indexed, do a Google search for site:yourdomain.com (substituting your own domain name of course).  This will provide a list of all the pages currently indexed by Google.  It may include a mixture of Old and New pages. Try clicking on the old Page links – if they still come up with the old pages or you get 404 (file not found) errors – read on and I’ll explain how to fix this.  If they do still link to the old pages, then you may want to delete these from your server too.

It is critical that as part of any site redesign process you ensure that that you put in place page redirects – this will ensure that anyone trying to access one of your old pages, will be redirected to the new page.  This is clearly important from the user perspective – to ensure that they get the current information (and not some old – out of date page).  But it is also important from an SEO perspective – any links to the old page (from external sites) need to go to the New page, and the search engines (who have presumably indexed your old pages) also need to be told that a new page exists.

Notifying Search engines and fixing backlinks for all your pages may sound like a very daunting task, however, there fortunately is a (reasonably) simple solution – our friend the 301 redirect.

301 Redirects are a server based redirect and are reasonably easy to setup (although can be a little technical, so you may need help from your developer).  The actual technique will vary, depending on your server environment, but effectively a 301 redirect will simply redirect visitors trying to access your old pages to the correct new page.  Also know as a permanent redirect, 301 redirects also tell Search Engines that this is a permanent change, and to update their index (and ranking data) accordingly.

you can find more posts about 301 redirects on this site – or for some more technical info I suggest that you take a look at this good overview on 301 redirect techniques by Steven Hargrove.

This week, Google revealed they have been working on the next generation of web search, code named Caffeine and have invited the public to take it for a test drive via web developer preview.

The new search infrastructure is the beginning of Google’s advance towards improving indexing speed and scale as the size of the web grows increasingly cumbersome. Google is seeking feedback on the changes from experienced users and web developers. From the official blog post:

“It’s the first step in a process that will let us push the envelope on size, indexing speed, accuracy, comprehensiveness and other dimensions. The new infrastructure sits “under the hood” of Google’s search engine, which means that most users won’t notice a difference in search results. But web developers and power searchers might notice a few differences…”

The first thing that came to my mind when I heard about Caffeine was the Microhoo deal. It seems like too much of a coincidence that Google would allow a public preview of their new search architecture within a week of their two biggest rivals forming a partnership. I thought it was a “Hey, we’re doing more important stuff” kinda announcement.

But Head of Google’s Web Spam Team Matt Cutts insists it has nothing to do with their competition:

“I love competition in search and want lots of it, but this change has been in the works for months. I think the best way for Google to do well in search is to continue what we’ve done for the last decade or so: focus relentlessly on pushing our search quality forward. Nobody cares more about search than Google, and I don’t think we’ll ever stop trying to improve.”

Some bright spark has already set up a page to show you what SERPs look like before / after Caffeine.

What do you think? Is the timing of the Google Caffeine announcement purely coincidence? Notice any major SERP changes using Caffeine? Please post your comment

From your article Top 10 AdSense Tricks To Boost Your Commission on Search Engine Guide you write:

“You can see an example of this color-matching on my search engine advice blog notice the 4 link ad unit and skyscraper text ad unit on the left hand side under the headings Ads by Google as you scroll down the page? The link and text colors are identical to the color palette used throughout the rest of the page.”

I’d like to implement this trick into my own blog but would like to see the visual example on your blog so I understand what you mean. I’ve searched and searched your blog and either I am blind or it is gone. Help!

That article was written over 3 years ago and I have completely changed the blog design since then and no longer use AdWords on my blog pages. However you can still see the old 4 link ad unit I was talking about in the header of the Ask Kalena blog archive pages.

To implement the color matching on your own site, follow the instructions in the article, being sure to choose your ad unit background color that best matches your blog color scheme. 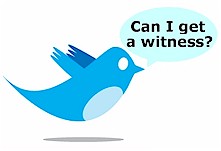 Twitter isn’t having a good week. As well as suffering a mighty DDoS attack, it looks like they’re being sued for patent infringement.

TechRadium, a Texas-based technology company which makes mass notification systems for public safety organizations and the military, is suing Twitter for patent infringement. The scary part is that TechRadium may very well have an excellent case. The safety company has three patents relating to the delivery of mass notification:

Clearly, TechRadium find the Twitter service to be too similar to their patented methods. Here’s an extract from the actual lawsuit, filed in Texas on August 4:

“On information and belief, Defendant, Twitter, makes, uses, sells, or otherwise provides throughout United States and within the geographical area covered by the United States District Court for the Southern District of Texas the systems and methods described by the claims in the ‘389, ‘183 and ‘165 Patents.”

TechRadium are deadly serious about this. They’re seeking a permanent injunction against Twitter for the use of their patented technology.

But this shouldn’t come as a surprise to Twitter. According to TechCrunch, Twitter executives were well aware of their vulnerable position in relation to potential patent lawsuits. In a meeting in February this year, staff discussed the likelihood of being sued for patent violation, recording in the meeting minutes:

“We will be sued for patent infringement, repeatedly and often. Should we get a great patent attorney to proactively go after these patents?”

So with one of the related patents issued as early as 2006, why have TechRadium waited so long to take legal action? One of the deciding factors have been market erosion. With the ever-increasing popularity of Twitter, it seems that TechRadium’s paying customers are choosing to use the social media service in lieu of TechRadium’s paid offering, since both services offer basically the same thing.

TechRadium is losing business and they’ve decided the time is right to defend their patents. Also, it looks as though the crucial Patent ‘165 was only granted to TechRadium in April, so they may have waited until they had all their legal ducks in a row before filing against the cashed-up Twitter.

We’ll keep you up to date with developments as the case continues.