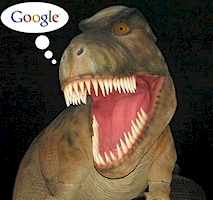 Could the Google Gigantosaurus be challenged by a Yahoo / Bing Tyrannosaurus-Rex?

That’s the question I pose in my latest SiteProNews blog post Could it be Bing(o) for Yahoo? in response to the rumors that Yahoo and Microsoft are about to announce a major search advertising partnership.

What are your thoughts? Is a Yahoo / Bing T-Rex going to be strong enough to take a bite out of the Google Gigantosaurus? Please leave your comments below.

Has anyone else been following the drama unfolding at Yahoo this week?

A battle of wills between a major shareholder, Carl Icahn, and the Yahoo board of directors has seen Microsoft take a step closer to a Yahoo acquisition. The in-fighting has seen board members step down, new ones get appointed and the majority of them having to stand for re-election when the company holds it’s Annual General Meeting on August 2.

Read the whole saga in my latest blog post at SiteProNews.

Microsoft has called it quits on their 3 month infatuation with Yahoo, withdrawing their official proposal today by snail mail.

“Despite our best efforts, including raising our bid by roughly $5 billion, Yahoo! has not moved toward accepting our offer. After careful consideration, we believe the economics demanded by Yahoo! do not make sense for us, and it is in the best interests of Microsoft stockholders, employees and other stakeholders to withdraw our proposal”.

Wow. Now there’s a turn-up for the books. Yahoo’s advertising fling with Google last month must have really hurt for Balmer to abandon the pursuit. Kudos to Charlie for the heads up.

ADDED: Yahoo has officially responded to the rejection.

You all know by now that Yahoo has rejected Microsoft’s 45 billion dollar offer to acquire them and form a super search company (which I nicknamed Microhoo). The price was unanimously rejected by Yahoo’s Board of Directors and described as “substantially undervaluing the Yahoo brand”.

But what I found the most interesting development in the whole chain of events that unfolded last month was Google’s reaction. Check out their public statement on the potential acquisition. Not only does it use a scathing language against Microsoft, but it’s issued by a single person instead of the company as a whole: David Drummond, Senior Vice President, Corporate Development and Chief Legal Officer. Here’s an extract:

Could Microsoft now attempt to exert the same sort of inappropriate and illegal influence over the Internet that it did with the PC? While the Internet rewards competitive innovation, Microsoft has frequently sought to establish proprietary monopolies — and then leverage its dominance into new, adjacent markets.

Could the acquisition of Yahoo! allow Microsoft — despite its legacy of serious legal and regulatory offenses — to extend unfair practices from browsers and operating systems to the Internet?

I may be completely off base here, but this suggests a couple of things to me:

1) Senior staff at Google weren’t comfortable enough with the content of the statement to release it as a standard-issue corporate press release.

2) Some staff at Google clearly have an axe to grind with Microsoft.

4) Google may approach (or may have already approached) Yahoo with a similar acquisition offer.

Maybe the threat of a Microsoft buyout of Yahoo will force Google’s hand. I am betting we’ll see some big moves from the big G this year.