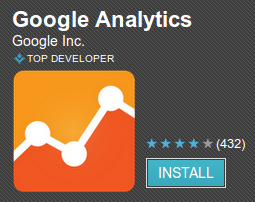 Google Analytics App for Android  is a mobile app that delivers essential analytics data to you anytime, anywhere, provided you have an Android-enabled phone. In a meeting and need traffic or sales figures quickly? No more having to wait until you can access your desktop PC to see important stats – with the Analytics App, they are all now at your fingertips.

You can see real time statistics, customizable dashboards and intelligence reports directly on your phone with the Google Analytics App. It allows you to access the same accounts and profiles you see when you open Analytics from a desktop browser, but the reports are delivered in an optimized format for your phone.

The following *swipe through* reports are available:

The Google Analytics app is available from here and currently has an average user rating of 4 stars, based on over 400 reviews.

In case you’re unfamiliar with the term, Cloud Computing is another name for Internet-based computing, whereby shared resources, software and information are provided to computers and other devices on-demand, like electricity. Services and storage are provided over the Internet or *cloud*.

Google Apps for Government includes the same tools as Google Apps Standard Edition, but with a couple of additional security features to meet the needs of the public sector.

“Google’s cloud offers higher reliability, best-in-class disaster recovery and access to a steady stream of innovation – all of which can provide substantial improvements over existing systems in addition to significant cost savings. And with no hardware or software to install and maintain, Google Apps for Government allows agencies to redeploy resources to technology projects core to their mission of serving the public. This new edition should give governments an even stronger case for making the move to the cloud.”

The suite is available now to any federal, state or local government in the United States for USD 50 per user, per year.