I’m delighted to announce that Search Engine College has hired a new tutor this week.

Micky Stuivenberg is an international SEO and website copywriting professional who has worked and lived in Europe, Singapore, Hong Kong and the US. Micky currently lives on the mid North Coast of Australia and she runs her own Content Writer business, working as a website copywriter and SEO content specialist to help clients in Australia and across the globe make their websites more successful.

Micky will initially be assisting me with tutoring and grading duties for SEO101 and SEO201. She’ll also be keeping an eye on our student discussion forums to answer any student questions and make sure you’re all behaving yourselves.

Micky is a graduate of Search Engine College, completing a  Certified Search Engine Optimizer Pathway in 2008, as well as certification in three additional subjects. You can read more about her on our tutors page.

Please give a warm welcome to Micky!

Do you follow any US companies on Twitter? Are there any you feel are getting it right? Any businesses getting it very wrong?

I’m writing an article for a major online/offline magazine about this topic and if you’ve got an opinion to contribute, I’d love to hear from you.

You can start by taking my first Twitter poll on the subject. If you’ve had or observed a particularly positive / negative experience with US-based companies on Twitter, let me know via Twitter, or if 140 characters just won’t cut it, contact me via the big red button above.

Unless they wish to remain anonymous, I’ll be giving credit to helpful tweeps in the article so please include your Twitter id and the id / tweets of the company you’ve observed. At this stage, I’m only looking for information about US-based companies using Twitter, particularly large brands.

[Disclaimer: Sumo Lounge sent me an Omni chair to keep in exchange for taking the time to review.]

When I was first approached by Sumo Lounge about reviewing their Omni chair in my blog, I thought: What? Why me? Then I realized that it actually made perfect sense.

Being one of Australia’s Top 100 bloggers means that I have a large audience that is likely to be a similar demographic that Sumo Lounge are trying to reach with their Omni beanbags. 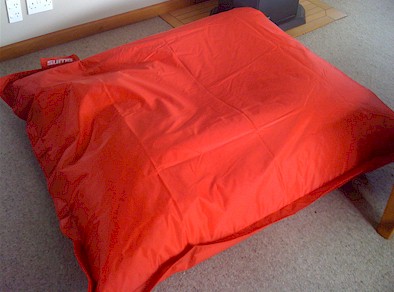 It turns out that Sumo Lounge have just rolled out their products into the Australian and New Zealand markets and according to their site, the Omni chair is the most reviewed bean bag chair in the world. So Sumo Lounge actually get better traction from people blogging about their bean bags than they do from typical glossy mag or TV advertising. Smart!

The fact that I also dig beanbags and they offered to send me one was a pretty good incentive too. Never turn down a free beanbag in a global economic recession, that’s my motto.

But seriously, I had been using an ergonomic office chair for hours every day and was still suffering from severe neck pain. Taking the laptop into the living room to work while watching TV was not much fun either, because our sofa is one of those huge things that envelope you with cushiony goodness and it’s hard to get out of – not great for the spine OR comfortable for typing. So I was on the lookout for a more versatile chair that would allow me the freedom to work on the laptop in various locations.

So a couple of weeks ago, this THING arrived (see pic).

I don’t know who was more excited, me or my five year old. I couldn’t believe how big it was and figured it would probably fit two people depending on, erm, their positions. The bright color was great and while I could tell it was filled with traditional beans, the covering was unlike normal beanbags. It was like a cross between vinyl and plastic and was flexible but quite tough. 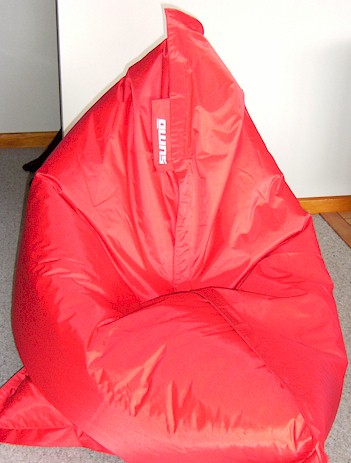 My five year old test-drove the Omni chair first, sitting in it for about an hour watching some after-school TV. He gave it two thumbs up. So I tried it out for a half hour or so in a kind of lazy, nearly fully laying down position while reading. So far, so good. I decided one night that I wanted to get some work done while watching a movie so it was time to try out the chair as a working location. First of all, I had to sculpt it into the shape that would support my spine and allow me to sit my laptop comfortably in my lap. I chose to mould it upright like the pictures on the site (see pic). That done, I parked myself and got to work.

At first it was kind of uncomfortable, but then I worked out that I wasn’t giving my neck enough support, so re-arranged the chair until my back was relatively straight and the top of the chair was touching my hairline. That was much better, but after an hour of typing I developed quite locked shoulders and a stiff neck. Mind you, this may have had more to do with the fact I was constantly switching my gaze from my laptop to the plasma screen.

Unfortunately, the Omni chair wasn’t high enough to use at my desk, but I did use it a couple of times while working in the living room. The Omni is best as a chair to lounge in while watching TV or performing Singstar Karaoke (ahem…). Being able to shape it to your own body or preferred sitting position is unique to this particular chair and not something I’ve seen in any other beanbag. But it’s still a beanbag and therefore not recommended for long term use if you want to protect your back and support your spine.

A week or so after the Omni chair arrived, my son came to me with a handful of beans saying that the bag was *leaking little balls*. Uh Oh, I thought. Sure enough, the chair had developed a small tear in the seam and the beans were leaching out. (photo) I had noticed when I received it that the stitching along one side looked pretty flimsy and the inner row of stitching had actually failed, meaning that beans were located along one side between the inner and outer rows of stitching, but I thought perhaps I’d been sent a manufacturer’s second and that it didn’t really matter. 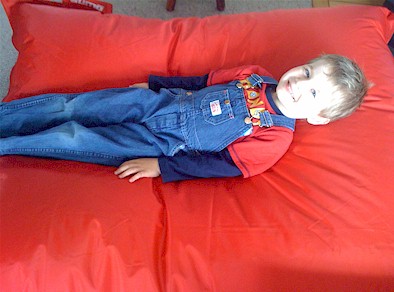 But at some point after it arrived, the outer row of stitching gave way and now it has a 5 cm hole along the seam on one side so we can’t use it. My five year old son had apparently been jumping on it too, so I’m not really surprised the seam gave way. I realize now that I should have alerted the supplier about the seam breach when it first arrived. Oh well!

The good news is that I let the Sumo Lounge people know about the issue and they’re going to send me a replacement. Hopefully it will last a little longer than 1 week.

Moral of the story? Don’t let 5 year olds jump on your beanbag.

I never did receive a replacement Omni Chair and any follow up emails to the company were ignored. Therefore:

Revised Grade out of 10 for Sumo Lounge’s customer service? 5/10

Well after a year of being listed in the Top 100 Australian Blogs Index, this blog has moved up 20 spots from position #91 in January to position #71 this month.

My friend Neerav has jumped ahead of me to position #48, but at least I’m now beating Duncan Riley who’s at #78. Woohoo!

As I’m now located in New Zealand, I probably shouldn’t be on this list anymore, but I won’t tell if you don’t.

Thanks to all my subscribers who have helped boost the stats. If you haven’t yet subscribed, press the big red feed button on the left and help me reach the top 50 next update.

You’ve said in your SEO 101 course to look into sites within the same industry when building links.  I have been able to talk my supervisor into letting me “play” with our company website and give her some feedback with the knowledge I have already.

One of the things I have found is a lot of broken links on our website so they are going to fix those but some of those partners will not reciprocate and post our website link on their site.  Do you find this quite common?

Also, some of the professional medical organizations we belong to will also not post our website link as they say it is against their rules.  If we just use general business directories, how do we know we’re targeting the demographics we want?  What do you suggest?

When link building, it’s not the number of links that is important, but the quality of those links. Reciprocal links are not your ultimate goal because one-way links are generally more valuable.

Unless there is a very popular site in your niche that won’t give you a link unless you link back, in my opinion you shouldn’t seek out reciprocal links and should instead be aiming for one-way incoming links to your site.

So for example, a one-way link from a medical related category on the JoeAnt Directory back to your site is generally worth much more in the eyes of Google than say 10 links from poorly trafficked sites in your industry or reciprocal links from low quality link farms. That’s because business directories such as JoeAnt, Business.com, Gimpsy and similar directories have a large audience and a long history so they have more *trust rank* in the eyes of Google.

So what you should be doing is seeking out links from sites with a similar medical theme, medical categories on trusted business directories and related sites that have a lot of traffic and preferably a high Google PageRank. One good method is to look at your major competitors and check their backlinks in Google to see what sites are linking to them and then approach those sites to see if they’ll link to you too. But remember to verify if those sites have a decent Google PageRank and suitable audience before pursuing a link.

How to Evaluate a Directory for Link Building