Twitter began rolling out their controversial new Retweet functionality last week to quite a large number of beta testers, me included.

In the past, when Twitter users wanted to repeat the tweet of somebody they followed, they would simply use the *RT* or *via* syntax in front of the twitter handle of the person whose tweet they were repeating, to signify attribution.

Some Twitter clients have built-in functionality to enable people to retweet other’s tweets automatically this way and add the RT syntax with one click.

Now, Twitter has introduced functionality that streamlines the process of retweeting and makes it more intuitive for the user.

If you’ve been granted access to Retweet beta, when you login to Twitter.com, you’ll see the following message about it at the top of your timeline:

“Hi there, you’re part of a beta group receiving this feature, which means you may start seeing retweets in a new way. People who don’t have this yet will see your retweets prefaced by *RT*”

Once Retweet is active in your account, you’ll see a new Retweets section in the side bar where you can see “Retweets by others”, “Retweets by you”, and “Your tweets, retweeted”:

Users that you follow will have a new retweet icon appear under their profile picture when you view their timelines. Hover your mouse over the icon and it says “Retweets from this user will appear in your timeline”.

Next to each tweet in your home timeline, you’ll now see the “Retweet” option as well as the “Reply” and “Favorite” options.

When you see a tweet you’d like to tell your followers about, click on the “Retweet” link and a popup will ask “Retweet to your followers?” and provide you with a Yes button to proceed or a X to cancel. Once you click Yes, the tweet will be sent out and appear ONLY to your followers. You also have the ability to permanently *undo* your retweet at any point.

Retweets sent this way by those you follow will be identifiable by a special Retweet icon next to them in your timeline. (Except, it seems, any retweets of YOUR tweets. A tweet that already exists in your timeline won’t reappear at the top if someone you follow retweets it, but it will be added to your RT list).

Retweets will also have extra attribution underneath them stating “Retweeted by [user] and [#] others” where “user” indicates the person who retweeted it and “#” represents the number of others who have retweeted the same tweet.

Retweets sent via the new system will only display the RT icon when you’re logged in to Twitter. When you’re viewing a timeline with new Retweets in it while logged out of Twitter, those tweets will just have “RT” in front of them and no attribution underneath.

You can see a visual breakdown of new retweeting in action here. 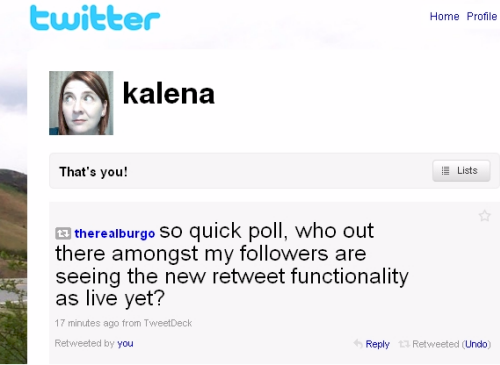 The Tweeps Are Revolting

Although I’d read about the new feature, I’ve been finding it hard to get my head around. Now that I’ve got beta access, I’m even more confused.

Judging by some of the Twitter commentary taking place between beta users, it seems I’m not the only one who is initially unimpressed.

A major sticking point for some users is the loss of the ability to edit or append comments to the tweet you are retweeting. This is a big change from old skool retweeting and has some users in knots.

Another major irritant for some beta testers is that Retweets by persons you follow will appear in your timeline in pure context – so even if you don’t follow the person who made the original tweet, you’ll see their Twitter avatar and tweet in your timeline with the “retweeted by” attribution underneath. Complaints about this have started already. 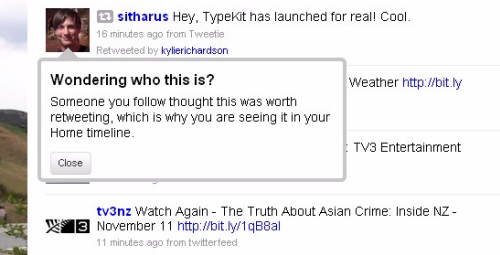 A poll launched by a Retweet beta user tells the story quite well. Asked “How do you feel about twitter’s new integrated retweet feature?”, 6% of poll takers claim to “love it”, while 43% “prefer the original method” of retweeting and the remaining respondents (51%) feel “It has potential but still needs work”.

So if the organic RT functionality was working so well, why did Twitter executives decide they needed to legitimize it? For a lot of reasons, as it turns out.

Organic retweeting had the following issues:

But even though the new Retweet overcomes the disadvantages of the old skool retweet, users are clearly threatened by the changes.

I think it’s stirring people up mainly because the whole concept of retweeting was developed ad hoc by Twitter users. They began sharing tweets by people they followed with their own followers, adding “retweet” or “RT” in front of the tweet to indicate such.

The developers of Twitter apps caught on to the RT popularity and many of them added retweet functionality to their Twitter clients. Not surprisingly, Twitter users are protective of the function and have certain expectations when it comes to official integration of the functionality.

Rather than simply imitate 3rd party Twitter client developers and add a RT button on Twitter.com, Twitter executives wanted to build something with more scope.

According to his blog post this week, Twitter Co-Founder Evan Williams (@Ev) fully expected the Retweet feature to be controversial. But, he says, the new feature resolves many of the technical issues that organic retweets were causing:

“The design is simple: There’s a retweet link by each tweet and, with two clicks, it will be sent on to your followers. This takes care of the mangled and messy problem because no one gets an opportunity to edit the tweet.”

“ The meta data (about who tweeted and who retweeted) is not in the tweet text itself, so they never have to be edited for length. Because they’re built natively into the system, they’re trackable. And because they’re trackable, we can take care of the redundancy problem: You will only get the first copy of something retweeted multiple times by people you follow.”

Evan also has a response for people complaining about seeing the avatars of people they don’t follow in their timeline:

“The drawback is that it may be a little surprising (unpleasant even, for some) to discover avatars of people they don’t follow in their timeline. I ask those people to keep in mind the following: You’re already reading the content from these people via organic retweets. This is just giving you more context.”

Evan also says that retweet annotation, (where you can add a comment or hashtag to a retweet), may be added as a feature in a later version depending on demand.

A major factor that likely had a large influence on Retweet development but hasn’t really been touched upon is the impact of RTs on search.

Extensive retweeting can skew search queries both on Twitter Search and major search engines and the new Retweet functionality will filter out much of that redundancy. The new RT also adds meta data to each tweet you retweet, sending a clearer signal to search engines about what content users are finding popular and making it easier for users to search for specific tweets in full context.

If you’re not impressed by the new Retweet feature, don’t stress about it. From your Twitter dashboard, you can: