I’m creating my own ads in Google Adwords at the moment.  When reviewing what I’ve learnt in your Pay Per Click lessons, it says under the Appropriate Language section:  “Must not feature call to action phrases (Eg click here, visit this site)”.

Yet, when I visit the Google AdWords Help Centre, it encourages the use of Calls to Action – Under the heading “Empower customers to take action”.

Have I got this twisted? Which is right? Is there a difference between Calls to Action and Action Phrases?

So the advice under the *Appropriate Language* section relates specifically to editorial guidelines, while the advice in the AdWords Help Centre relates to recommended tactics you can use, rather than specific wording.

I recommend reviewing the more specific editorial guidelines for AdWords ads as well.

Today was a red letter day in my quest for freelance work. It was finally time to start applying for actual gigs. So armed with my espresso and a fierce determination, I logged on to my account at Elance. 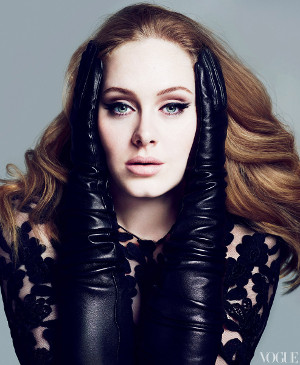 My morning went from great to Adele pretty damn fast

Now, an individual membership with Elance costs USD10 per month and includes 60 *connects* (whatever the heck they are) and one jobs category. This means that you can’t apply for jobs outside your chosen category, unless you pay more. So I had to start by choosing a category. Given that most of the gigs I’m after relate to search marketing, I chose the Sales and Marketing category and began my search.

According to Elance, there were over 2,600 jobs available in the Sales and Marketing category. Brilliant! The caffeine began to kick in and my hopes were high. I narrowed my search to Search Engine Optimization and hit enter. A promising 433 SEO jobs were available. So far, so good. I clicked on the most recent job listed.

A company in New York was seeking an advanced SEO expert to get their websites (and I quote) “Guaranteed page 1 Google rankings in the USA & Canada for a list of 40 to 50 keywords”. Um, besides the fact that it isn’t actually possible to guarantee final ranking positions (as that is determined by Google’s own algorithm), it’s kind of difficult to pitch my ability to help without knowing:

a) What type of sites these are

b) What industry this is

c) What keywords you are targeting and;

d) How much competition you face.

Hmmm. My hopes were falling faster by the minute. So exactly how much was the company offering to compensate this expert SEO in exchange for achieving such an impossible task?

I practically choked on my coffee. Surely this was a typo? But then I noticed that they had 11 proposals already from freelancers willing to take on this gig. What the actual firetruck? But yes – apparently several freelancers based in Bangladesh and the Philippines were more than happy to work for pennies.

Ok, I thought. This is just an anomaly and there are 432 other SEO job opportunities that I can apply for. So I clicked on the next gig in the list. A UK based software development company was seeking a remote SEO specialist for a 2 week project. This sounded promising so I clicked for more detail. Uh Oh. The advertised hourly rate was $10-$15 and they would prefer to hire Ukraine-based freelancers. With site-scraping experience. And the availability to Skype 24/7. Oh FFS.

With my hopes plummeting towards the ground like a skydiver with a ripped parachute, I thought perhaps I should take a different tack. So I ran a search for Google AdWords projects and a list of nearly 200 popped up. An ad agency in Australia was looking for someone to manage 35 AdWords accounts on behalf of their clients, including bid-tweaking, keyword research, video ad creation and 300 page report generation (with the agency logo of course) for a flat fee of $500 per month. Seriously?

Or perhaps this one – a company in Malaysia wanted help to create an AdWords campaign for a new erectile dysfunction product. Oh HELL no. The keyword research alone would make me shudder.

It was about this time that I began playing Adele on repeat and consuming an entire tray of peanut butter cookies. Oh well, perhaps tomorrow I will find a freelance project that has realistic potential to actually cover my rent?

After yesterday’s fun and games with “skills tests” on Elance, I thought I’d try some tests on oDesk. Surely their tests can’t be as confounding, right?

I started by taking the SEO test and then after locking myself in the cupboard to scream for a while, I came back out and took the AdWords test. The oDesk test questions (provided by ExpertRating) had many of the same hair-pulling, doughnut binge-inducing issues as the Elance questions: ambiguity, outdated references, subjective wording, blatantly incorrect answers.

What made things worse with oDesk was that although the system gives you the opportunity to provide feedback on the questions, you have to submit it within the 15 second time limit allocated to answering each question. So you end up playing this kind of wide-eyed, manic game of whack-a-mole, randomly hitting radio buttons and typing angry comments. Needless to say, I was pretty stabby by the time I completed a few “skills tests” on oDesk.

Having proven my skills in speed typing and passive aggressive commenting, it was now time to apply for some actual jobs. Uh oh.

I feel your pain, Elisa

So I started the day by creating a profile on oDesk. Friends on Facebook had insisted I would have a much better chance of finding work on oDesk than Elance, as it had more of a tech audience and I wouldn’t be undercut by 12 year old sweat-shop workers in India. Or something along those lines.

The profile creation process was longer for oDesk, mainly because you couldn’t import CV detail from LinkedIn, so you basically had to recreate your entire CV from memory.

After uploading some portfolio items on oDesk, it was time to return to Elance in order to take some skills tests. I use the phrase “skills tests” loosely. I would neither class these quizzes as *tests* or involving any *skills* whatsoever. Unless you count the ability to slam your head repeatedly into your keyboard.

I started with the SEO “skills test” (note the air quotes). During the process, I became more and more frustrated. The majority of SEO questions were about the robots.txt file, which I found strange. Others were super outdated, often because recent algorithm changes made the question redundant or they referred to product names/services that no longer exist  e.g. Google Places. The more questions I took, the more ambiguous or redundant the questions became, meaning I had to guess what the author meant rather than rely on my 18 years of solid SEO knowledge. Finally, there were no more questions in the pool so I had no chance of improving my score. Wonderful. 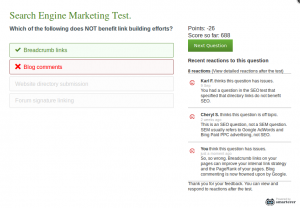 Next up was the AdWords “skills test”. This had similar issues to the SEO test, with ambiguous or simply outdated questions. Take for example the question *Can you use the same keywords in different AdGroups? Yes or No?*. Although I guessed the answer correctly as *yes*, the question needs to be re-worded. Any good advertiser knows that although it IS possible, you should never use the same keywords in multiple AdGroups, because Google won’t know which ad you meant to show and will just pick the one with the highest AdRank. This means you are effectively competing with yourself and driving up the CPC.

So for clarity, the question should ask “Is it possible” rather than “Can you”. (Reading that last paragraph back, I sound like a complete wanker, but other digital marketing folk will no doubt be nodding their heads ).

The Google Analytics test was mostly straight-forward, but there was a focus on only one or two aspects of Analytics. Which seems kind of ridiculous when you consider that Avinash Kaushik’s book on Web Analytics is 500 pages long and weighs a kilo. 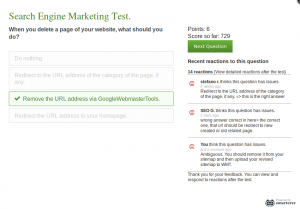 After that, I took the Bing Ads test. Nearly half of the questions were about JavaScript programming instead of Bing Ads. Which is perfectly understandable, if you’re insane.

Judging by some of the feedback comments, I wasn’t the only person who found this frustrating. Last of all, I took the Search Engine Marketing skills test. Again, many of the questions (or answers) were either irrelevant, redundant or outdated. Quite a few were subjective or written in a way that was too ambiguous.

I left quite a lot of feedback on the questions, but of course this ate into the time I took answering each test, which lowered my overall score and increased my stabbiness and doughnut intake. I think this is a bug inherent in the Elance system, but something that could be easily improved. Perhaps they should find a way to allow test-takers to tag a problem question and provide feedback at the end, after test time has been recorded. Or perhaps send each applicant a box of doughnuts by way of apology?

As you can see by the attached screen-shots, I wasn’t the only one unhappy with the test quality. I particularly enjoyed Elisa’s comment “Are you proud to write stupid questions?”.

Having such a lot of negative feedback clearly viewable by test-takers reflects badly on Elance. I’m not sure how often the feedback is reviewed, but to the public, it looks as though the feedback is being ignored completely.

I wonder if oDesk will have the same issues? I’d better buy more doughnuts. 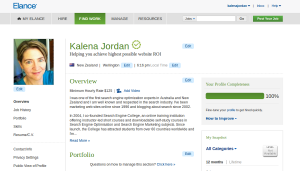 To achieve 100 percent profile completedness (is that even a word?) on Elance requires the following:

My identity verification interview was scheduled for between 9 and 10am this morning and I was pleasantly surprised to receive my Skype call about 9.20am. The verification process lasted all of 2 minutes and involved simply switching on my web-cam and speaking a few words to the authentication agent. Perhaps being presented with someone in a lime green bathrobe and no make-up made him speed the conversation up. I’m not sure. But within a few minutes, I received an email stating that my identity verification was complete.

The Portfolio section of your Elance profile is where you can upload samples of your work to create an online portfolio of sorts. Once you’ve uploaded work samples, you can attach them to any job proposal you submit.

For freelance web designers and graphic artists, this is a pretty straight-forward concept, as you can simply upload web designs, images and artwork you have created. For a digital marketer, it requires a little more thought, especially when you have signed NDAs for nearly every client.

I suddenly wished I’d thought to record a recent meeting with a new client who slapped me on the back and exclaimed “Holy S**t that’s impressive. Those *bast***s over at [ill-performing agency name] are in for a grilling when I get hold of ’em!”. On second thoughts. Perhaps I could upload a picture of the giant box of chocolates another client couriered over following their web site audit?  Hmmm.

According to the 75 emails I received from Elance since registration (kidding!), I would have more chance of finding employment if I joined as many industry groups as possible. Immediately. These group had names ranging from WordPress Experts, to Microsoft Certified Professionals, to Facebook Developers to something with the rather concerning anagram of PIMP. (Turns out it has something to do with project management. But I digress).

I finally narrowed down my preferred group selections to:

To join these groups, I would first have to take a Skills Test in each discipline to prove my knowledge level.