It’s pretty much all about content creation and social media this week. Whether you’re creating content for yourself, or others, (or probably both), i’m sure you’ll find something of personal value in the following posts…

Seven Lessons Learned from Three Years of Content Creation by Pamela Wilson Are you a plodder? Or would it suit you better to create a backlog of material when inspiration strikes, and send it out at regular intervals later? Pamela shares some great lessons based on her own journey into content creation. I particularly like the idea of batching.

3 Types of Business Research to Develop a Better Content Marketing Plan by Pawelgra Bowski Creating engaging copy, for a company whose products you’re not really familiar with, is difficult, but not impossible. Pawelgra describes a few interesting methods to help us develop a deeper understanding quickly.

and last, but not least…

Transcribe ALL The Things! Benefits, Strategies, and More by Steve Morgan Another great idea for satisfying the relentless thirst for content – transcribing. Also good for gaining the heart of audiences in parts of the world where internet speeds are still low and watching online video isn’t easy.

The topic of link building has been popular in the blogsphere this week, so i’ve included a couple of those, plus two great infographic posts – but have you ever considered what happens to your digital profile after you die? Check out the last post for the answers.

Small Business Link Building in a Post-Panda Post-Penguin World by Dan Vuksanovich It’s great to see some solid SEO advice for small business owners. Dan is right that smaller businesses have different needs and resources to implement a larger SEO strategy – particularly when it comes to link building. Don’t miss Dan’s handy list of link building suggestions towards the end.

How to Use Content + Social Media for Link Building by Kristi Hines This is the new link building. Kristi examines ways to build your personal profile, through social media and by engaging with authentic bloggers. The days of anonymous link posting and sharing are over. The rise of social media means the actual people within a business or organisation need to build personal profiles.

The Current State of Smartphones by Adam Morgan I can’t resist a good infograph. In this post Adam shares his friend Victor’s fascinating infograph about smartphones. Smartphone use has risen exponentially over the past few years and they are totally changing the way we engage with media and each other.

The Definitive Guide to Writing and Promoting a Viral Infographic by Jayson DeMers This is a great follow on from the post above. If you want to improve your infographics or create one for the first time, you must book mark this post. Jayson takes us through step by step.

And for something quite different…

What Will Happen to Your Photos, Emails and Documents After You Die? By Bernadette Coleman I know it’s not exactly on topic, but most of us who run a business online have a large personal footprint on the web. If you’re like me you’ve probably never thought about what will happen to it after we die. In this post Bernadette has included instructions to enable certain features of Facebook and Google+ to safeguard the future of our digital profiles.

These days I’m doing quite a bit of online and in-person training in Google Analytics. The tool has become so sophisticated that people are struggling with the idea of where to start with Analytics and what meaningful metrics to look at on a regular basis.

In my training sessions, I like to mix things up a bit with case studies, whiteboard exercises and videos. It prevents *death by PowerPoint* and stops people from becoming overwhelmed with information in a short space of time.

My favorite 3) videos to show in the Google Analytics workshops are the Google Analytics in Real Life series, developed by Google as a humorous way to understand the frustrations experienced by visitors to your web site and how these would play out in real life. These always trigger laughter around the room, but they are also a fantastic way of bridging the gap between using Analytics to monitor customer activity on a web site and knowing what to tweak to improve the customer experience.

This video highlights common problems people have with the online checkout process – from trouble logging in, to being forced to enter ridiculous CAPTCHAs and being charged confusing shipping rates: 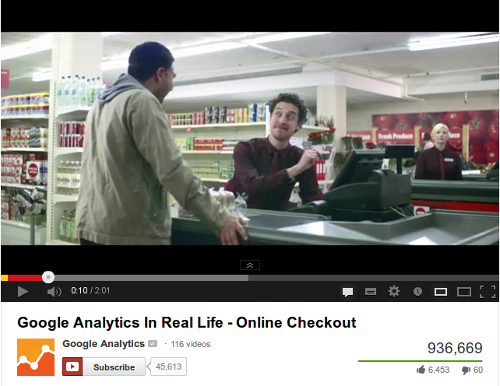 This video demonstrates what can happen if you interrupt the conversion process by placing distractions for visitors on your sales landing pages: 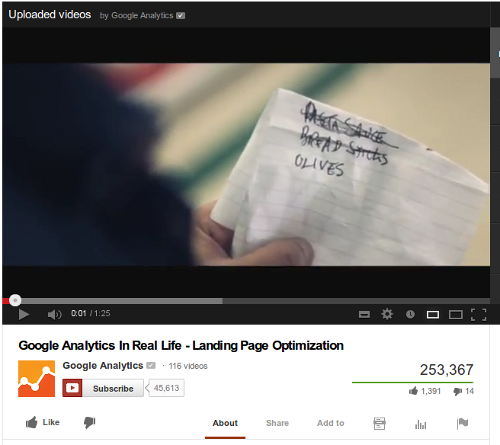 This last funny video shows how frustrating it can be for your site visitors when your internal site search functionality is counter-intuitive or just plain broken: 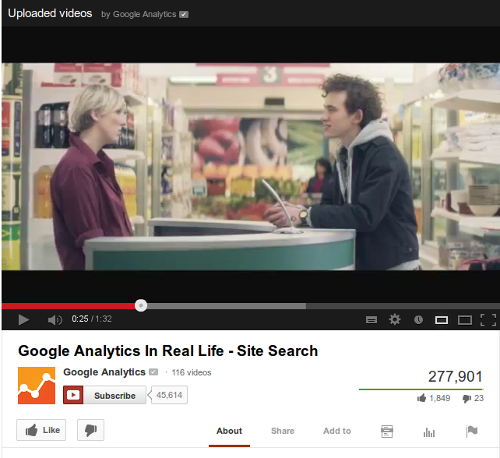 If it was 1 April, you might think it was just another of Google’s cheeky little April Fool’s Jokes, but Project Loon (launched today) is an actual experimental project from Google to make Balloon-Powered Internet a reality.

What? Balloon-Powered Internet? Yes. Internet access, powered by weather balloons in the stratosphere. Let me explain. We think of the Internet as a global community. But as Google points out, two-thirds of the world’s population does not yet have Internet access. 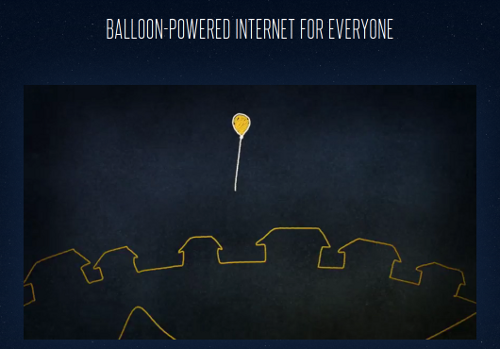 Google’s idea of Project Loon is to create a network of balloons traveling on the edge of space, designed to connect people in rural and remote areas, help fill coverage gaps, and bring people back online after disasters.

What better place to launch a Beta test of Project Loon than in an area prone to natural disasters? Google has chosen New Zealand, specifically right here in Christchurch, as their launch site for specially-designed solar powered balloons to test Project Loon. As the location of thousands of devastating earthquakes in the past 2 years, which knocked out power and Internet connectivity for weeks at a time, Christchurch was a natural choice to test the project.

Today a total of 30 balloons were launched a short distance from here, to travel up 20km above the earth and beam Internet to a small group of pilot testers. The experience of these pilot testers will be used to refine the technology and shape the next phase of Project Loon.

I jumped at the chance to become a Beta tester so hopefully, I’ll be one of the first people in the world selected to test balloon-powered Internet. If I am, you can bet I’ll be reporting on the experience right here ?

This week’s Fast Five has a couple of infographics, a must-be-at conference list and Facebook’s foray into #hashtags – something for everyone!

5 Useful Google Authorship  Infographics and Cheatsheets by Ann Smarty If your name is connected with your product then Google Authorship is a tool you should be using. This great infographic explains how it works and how to get the most out of it. Visual learners will especially love it.

14 Essential SEO Conferences and How Attending Each One Helps Your Business by Jayson DeMers I haven’t seen a post like this one before. Jayson has gone to the trouble of listing his top 14 conferences, including details on the kinds of topics covered, location, venue, date and time! Thanks Jayson.

Facebook Takes Page From Twitter’s Book: Debuts the Hashtag by Jennifer Cowan I noticed my teenagers were starting to use hashtags in their posts and now I know why! Facebook has embraced Twitter-style hashtags as a simple way for users to gain a broader perspective on what’s happening, or what people are talking about, at any given point in time.

How to Become a Social Media Marketing Specialist by Schools.com Another great infographic. This one clearly illustrates different ways to become a specialist in one of the fastest growing occupations around. You could even show your boss and demonstrate the need for training.

Four Ways to Use eBooks to Grow Your Business by Collins Paris If you have an established blog with a solid audience, the next step may be to write an eBook. eBooks add substantial value to your site and if they are well written can quickly establish your level of specialisation.