Direct PPC experience with Google AdWords, Bing and other PPC programs is a plus.

This job will be located in Melville, NY. They offer a competitive compensation and benefits package. Only candidates under consideration will be contacted. Prime Visibility is a division of PV Media Group and is an equal opportunity employer.

Please forward your resume along with your salary history to: jobs2[at]PrimeVisibility.com

For more search industry jobs, or to post a vacancy, visit Search Engine College Jobs Board.

1) Personalization and SEO – Whiteboard Friday by Rand Fishkin                             Google has become our friend, or at least it’s trying to. Personalized search means that Google knows important things about us, like where we spend a lot of our time, who our friends are, what we like, common search queries and so forth. But what does all this mean for the search industry? Rand’s casual (he’s wearing a hoodie) Whiteboard Friday post points SEM’ers in the socially orientated direction we all need to be in these days. Thanks Rand!

2) Announcing the Just-Discovered-Links Report by Tela Andrews                                   I’ve put this one in here for all the link builders out there. This ‘Just Discovered Links’ report generator is a new feature in Open Site Explorer, designed to help marketers find new links within an hour of them going live. “This report helps you capitalize on links while they’re still fresh, see how your content is resonating through social channels, gauge overall sentiment of the links being shared, give you a head start on instant outreach campaigns, and scope out which links your competitors are getting.”  Amazing stuff!

4) Increase Your SEO Business by Specializing by Shadi Khattab                                 SEO is a big industry now, long gone are the days of explaining to people “Oh I help websites rank better” and receiving blank looks in return. With so many SEO companies in the marketplace, how can a small start-up attract solid long-term clients (the goal of every business)? This great post inspires SEO’ers to find their niche and become experts by specializing in that niche.

Amazon’s Global Marketing Team is looking for a Head of Search Engine Marketing to lead the company’s worldwide paid search marketing program. As the leader of the Amazon Sponsored Links (SEM) team, you’ll lead the business and technology teams for one of the largest pay per click (PPC) search marketing programs in the world, and one of Amazon’s most important online advertising channels.

To be successful in this high visibility, high impact role, you will need to be a strategic and technically savvy leader who can drive long-term vision and translate business strategies into technology solutions.

For more search industry jobs, or to post a vacancy, visit Search Engine College Jobs Board.

I love the sheer diversity of this week’s Fast Five. We’ve got everything from Social SEO to dodgy PPC…

2) How Social SEO Proves to be a Boon For Your Business by Deepak Gupta                   If you’re looking for a way to explain why Social Media is an important part of SEO, this is a great article to refer people to. Deepak explains clearly how likes, tweets and shares tell search engines you are important.

3) Link Building for Small and Local Businesses by Geoff Kenyon                                   This is a great solid article about link building with a couple of ideas I’ve never come across before. In small business link building is often considered a luxury. Yet sometimes a big campaign isn’t necessary. Geoff shows us what a little thinking outside the box can achieve on a small budget.

5) How Not to Run a PPC Campaign inspired by eBay’s AdWords #Fail by Larry Kim  We’ll finish up this week with a tongue-in-cheek post, which turns the usual ‘helpful hints’ blog post format on its head. Larry takes pleasure in demonstrating how eBay, the world’s biggest marketplace, wasted millions when it came to PPC.

There appears to be a major glitch happening in Google AdWords right now that is preventing a large number of account holders in Australia and New Zealand from accessing their campaigns.

So I tried several other client accounts, clicking on the campaigns tab – with the same result – a rolling *loading* icon, which eventually resolves to a blank screen where the campaign details should be (see image). 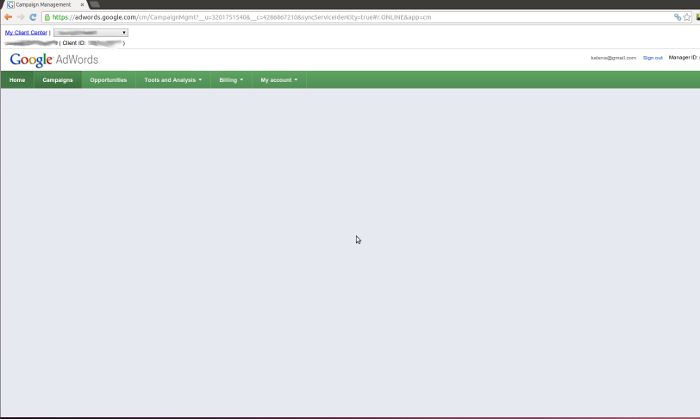 So I logged out of my MCC account and tried to log in to an individual account, only to receive the same error. I could login to the accounts, but could not view any campaigns. I took to Twitter and asked if anyone else was having trouble and so far it seems as though only account holders in Australia and New Zealand are affected.

Google emailed an announcement this week, advising that account holders in Asia Pacific were being moved from Google Ireland to Google Singapore for billing purposes (can you say tax break?), so I have a sneaking suspicion that this outage is related.

But this is mission critical stuff – the only way for my clients to control their AdWords accounts right now is to remove their credit card details! At the time of publishing this post, it’s been 17 hours without campaign access to my client accounts and my clients are getting antsy. I have a good mind to demand all click costs during this outage be reimbursed to their accounts.

The other problem is that I can’t grade assignments of my PPC students at Search Engine College because I can’t see their accounts to grade them! I’ve tried contacting Google via Twitter and through the AdWords Support team, but I’m yet to hear back.

Regardless, I’ll be interested in hearing Google’s excuses for this one. I’ll keep tabs on the length of the outage and report back when I know more.

Are you having trouble accessing your accounts right now? Please leave a comment if you are.

Postscript: Paul from AdWords California was kind enough to email me (and comment on this post) to confirm the issue and let me know they were working on it. Thankfully, it was resolved about 2 hours after this post was published. Turns out it was simply a bug in the system. Not sure if they got it ironed out completely, because I had trouble accessing the Billing tab in my MCC account this morning, but at least I can edit client accounts now.