Live blogging The Short and Glorious Life of Web 2.0 presentation at Webstock 09 by Zeitgeist Author and Wired Blogger, Bruce Sterling.

Bruce starts by saying, here in New Zealand, we have lost sight of Web 2.0. Mistakes have been made. You think it’s the world of tag clouds, drop shadows and fonts.

The definition is thesis-long and reads like a Chinese takeout menu says Bruce. He then showed a slide of the visual flow chart of the defintion (see below): 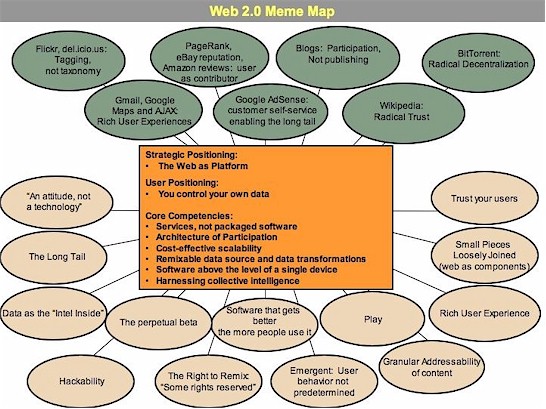 Web 2.0 looks like a social network. Add some scenery and pictures to this Web 2.0 diagram and it becomes a Webstock Conference (at this point there is some sniggering in the audience).

You can’t break it down and analyze it. What’s exciting about this 5 year old flow chart is the pieces that are utter violations of previous common sense e.g. the web as platform. Native web logic is a new turtle, sitting on another, older turtle, sitting on another older still turtle. Just like platforms sitting on clouds. (This imagery has me grinning because I actually have a ceramic representation of the turtles on turtles analogy on my bookshelf).

AJAX is an acronym. How the hell can you make an acronym of an acronym? (more sniggering). Everybody knows that Web 2.0 with it’s JavaScript binding everything is made out of AJAX. After all Sun built Javascript. Javascript is the duct tape of Web 2.0 – it’s the ultimate material that will bind anything. It’s the glue of mashups.

Bob Metcalf, the inventor of ethernet had to eat his words claiming that the Internet would fall over. We’ve used JavaScript to duct tape the turtles all the way down. What’s with this blog business? Most of the things we call blogs today have zero to do with weblogs. True Weblogs are basically records of web surfing. Bruce’s own *blog* is consumed with link rot. He blogged stuff that is now in mystical 404 Land. (At this point the sniggering in the audience has turned to a little bristling and some vexed looks. Tweets fly about the room with the same theme – is Bruce Sterling giving us geeks a public spanking for worshipping Web 2.0?)

The phrase Web Platform is weird. Up there with *wireless cable* and *business revolution*. What about *dynamic content* – content is static for Pete’s sake. It is not contained.  And don’t forget *collective intelligence*. Google apparently has it and therefore it matters. Businessmen and revolutionaries alike use Google.  Bruce sees Larry and Sergey as the coolest Stanford grads ever, with their duct-tape ridden offices (more laughter).

Geek thought crime is the assumption about what constitutes *collective intelligence*. This attitude makes you look delusionary. He’d like to see a better definition such as: *semi autonomous data propagation*. I paid attention to Web 2.0 because I thought it was important. I supported Tim’s solar system invention and thought Web 2.0 people were a nifty crowd. The mainframe crowd were smarter than Web 2.0 people – the super selective technical elite. Problem was that all sense of fun had been boiled out of them.

The telephone system was the biggest machine in human history, but the users couldn’t access the cables or the pipeline. Unlike now = where everyone gets their hands on the components. But I’m not nostalgic for the old days, after all nostalgia is not what it used to be.  Look at Microsoft: the place where innovations go to die (loud guffaws, including one from me and we all rush to tweet that little gem).

Next for the web is a spiderweb in a storm. Some turtles get knocked out. The Fail Whale fails. Inherent contradictions of the web get revealed. Prediction: the web stops being the fluffy meringue dressing of business. What kind of a world do we live in when pirates in Somalia can make cell phone sonar calls via super tankers? We’ve got a web balanced on top of a collapsed economy.

Next is a transition web. Half the world’s population is on the web and the rest are joining. We need to know how to make the transition. During Web 2.0, we sold ourselves to Yahoo. In the transition web, we have no safety net. We’re all in the same boat. I’m bored of the deceipt, disgusted with cynical spin etc. etc. Let’s get on with real lives. (Bruce’s rant continues, but at this point I am seriously rapt and stop typing to be able to pay more attention).

To experience the full spanking by Bruce, see his own transcript of the presentation.