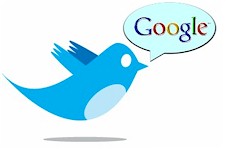 Earlier this year I wrote a post on SiteProNews about how excited Google was becoming about Twitter and how quickly they were creating new Twitter accounts.

Well Google has taken their endorsement of Twitter to a new level this week, with the addition of a directory of their official Twitter accounts to the Press Center.

I discovered the new directory when I visited the Press Center today and was greeted with the message:

Clicking on the related link brings up a comprehensive list of 87 official Twitter accounts representing almost all of Google’s products and tools, as well as many of the Google regions worldwide. When I viewed it, the Twitter directory page hadn’t even been cached yet, indicating that it’s pretty new.

Google’s decision to create such a large number of Twitter accounts and link to them in such a prominent location highlights their continued infatuation with Twitter. I wouldn’t be surprised if they were dating with a view to forming a long term partnership.

What do you think? Please add your comments below.