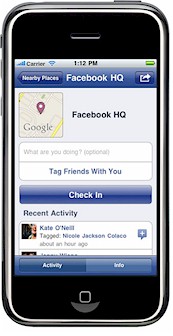 TechCrunch were keen to point out that they spotted the product before the launch even began, but the fact that Facebook were working on geo-networking functionality has been a poorly kept secret for a while now.

So what exactly IS Facebook Places? Think of it as a combination of Foursquare and Gowalla but available on Facebook. Which is interesting because Facebook have *partnered* with both of these supposedly rival companies. More about that later, but for now, here’s how it works:

You need to download the latest version of Facebook’s iPhone application OR if your mobile browser supports HTML 5 and geolocation, you also can access Places from touch.facebook.com.

Open the application of your choice and tap the “Check In” button (sound familiar?). A list of nearby places will show. Choose the place that matches where you are and check in. If it’s not on the list, you can add or search for it. Your check-in will show up in the Recent Activity section for that place and also create a status update from you in your friends’ News Feeds.

Who Else is Here?

Similar to tagging a friend in a photo, you can tag other Facebook friends who happen to be with you during check in and include a status update about what you’re doing at the location.

The “People Here Now” section allows you to stalk check what other Facebook users have checked in recently to the same place. Facebook suggests this is a way for you to meet like minded people, but I can imagine this feature becoming a privacy issue for some. Thankfully, Facebook have provided a way for people to opt-out of being shown in the People Here Now feature.

Does it Make Foursquare and Gowalla Obsolete?

Given that the check-in and recent activity features of Facebook Places are nearly identical to what Foursquare and Gowalla currently offer, there was some talk about whether there was room in the market for all three geolocation services.

However, both companies have worked with Facebook in the past and both were invited to partner with Facebook Places. Staff from each even spoke at today’s launch about their partnership. But let’s face it, what choice did they have?

Apparently, both Foursquare and Gowalla are going to allow users to publish their check-ins to their Facebook feeds and even transfer their pins and badges to Facebook Places. I’m sure the carrot of Facebook’s 500 million members was a tasty one, but you have to wonder if this will mean long term redundancy for Gowalla and Foursquare.

Having learned from their mistake with the profile privacy settings, Facebook have given users more privacy control over Places. You can only tag your existing Facebook friends during check-in and your check-ins will only be visible to your friends by default, although you can change this to public.

Just like removing yourself from a photo tag, you can remove any Places tag or check-in or tag. You also have the choice to turn off the ability for friends to check you in at Places. To do this, go to your Privacy Settings and turn off the setting to “Let Friends Check Me In.”

Facebook Places is currently only available within the US but should roll out to more countries within the next few weeks.