Sitting in the big chair marked Dumbass this week is an annoying little SEO outfit from Manchester called Web Propeller.

I ranted yesterday about how they were evil site scraping bastards because they basically steal the content from this blog within an hour of me posting it. I’m not the only one they steal from. They scrape Marty’s content too, as well as Niall Kennedy’s blog and others, listing us all as “contributors” on their blog home page. What’s up with that? As someone commented on my post yesterday, perhaps they should change that title to “unwilling, unwitting contributors”.

Well as luck would have it, they scraped my post from yesterday. So now they are proudly announcing on their own site what evil site scraping bastards they really are. And the kicker? They’ve tagged the post under the category seo problems. Bwa ha haaaaa! 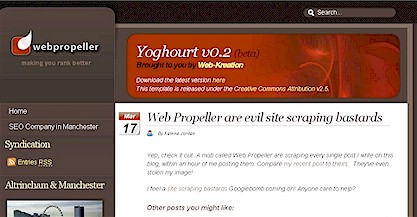 And just in case somebody from Web Propeller notices their stupidity and deletes the post from their site (perhaps while on a break from stealing other people’s content), I’ve posted a screen shot:

Some days, I really love my job. Wouldn’t it be a hoot if they scraped this post too? 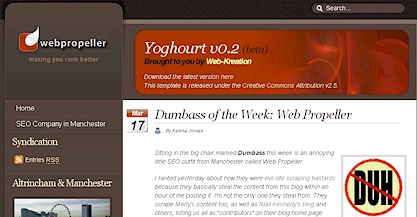 UPDATE 3: The penny has dropped. According to a public apology by the scraper himself, Web Propeller is a fictional company and the domain is owned by a company called Creative Suit.

The site scraping was apparently nothing more than an unauthorized experiment by a naughty junior staff member. His boss is plenty mad about it and is asking for suitable punishment suggestions. I was going to suggest they make him use this picture as his screen saver, but figured that was too cruel.

Apology accepted! Maybe site scrapers will think twice now before doing this to anyone else.