There is a quotation etched in the cement in Wellington’s Civic Square. It’s by Bruce Mason – a famous Wellington playwright – about the impact of theatre on community.

I’ve been to Civic Square many times, but I only noticed this quote last week. I found it particularly poignant, because a kind of theatrical magic happens in Wellington this time every year: Webstock week.

Some people see Webstock as a web conference, but those of us who attend regularly know it as The Week That Magic Happens. Mike Brown, one of the Webstock organizers, recently commented to me: “I love that you book your Webstock ticket without even checking who the speakers are“. For me, that is the impact of the Webstock brand. I don’t need to justify the ticket price by seeking out the headline acts, because regardless of the programme, Webstock is guaranteed to be magic.

What do I mean by magic?

Let me explain. I don’t cry very often. I didn’t cry while watching Titanic, heck, I didn’t even cry while watching The Notebook. I certainly don’t cry at other conferences. But I cry at Webstock.  Every. Single. Time. This year, I cried at three different points. Once when Garr Reynold’s voice broke while he was sharing a video of his now-deceased parents. Once when Mike Monteiro told us about Bobbi Duncan from Texas who was inadvertently outed as a lesbian to her homophobic parents on Facebook and again during Tash’s closing speech, when she was given a standing ovation before she even got halfway through. 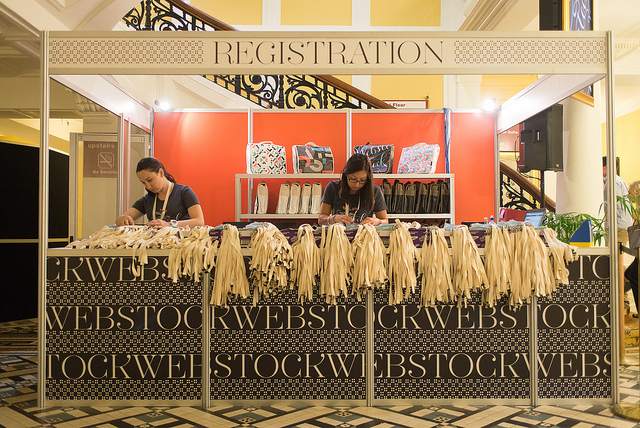 Even the registration desk is beautifully designed. (Photo courtesy of Webstock.org.nz)

If you were peeking in through the auditorium doors at any point during Webstock, you could be forgiven for thinking there was some type of Christian Revival meeting going on. And you wouldn’t really be too far off the mark. The eloquent speakers carefully chosen for Webstock are evangelists of sorts – preaching to us about the importance of creating a better world wide web and therefore a better world, making us stand up and yell out affirmations of our commitment to the cause with passionate gusto – “Yes we can!”

But although, as one non-attending Twitter observer wryly commented, the Webstock speakers seem to be inspiring rousing renditions of Kumbaya, in reality, they just serve as a reminder that we CAN change the world, one pixel at a time.

It’s not the speakers who make Webstock magic, it’s the inspiration they spark within us, the audience, that makes Webstock magic. We leave the conference believing in our own superpowers, our talents and our ability to make stuff that matters. 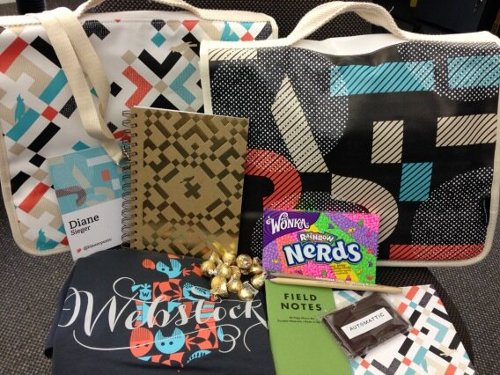 I hadn’t been at the conference more than an hour before I made the decision to radically change my business. I realized that if I’m going to make stuff that matters, I have to throw myself into my online training business and make it my #1 priority. Because it matters. It matters a LOT. It’s not enough to Write. Speak. Educate.  I have influence over students in 57 countries and counting. That matters. I can no longer treat my company as a hobby or a second job. I need to set an example and the only way to do this is to stop working for clients and start working on stuff that really matters to me.

From my perspective, Webstock 2013 can be summarized in those three words: STUFF THAT MATTERS. Below are my own takeaways from some of the presentations and how they fit into this three word mantra. 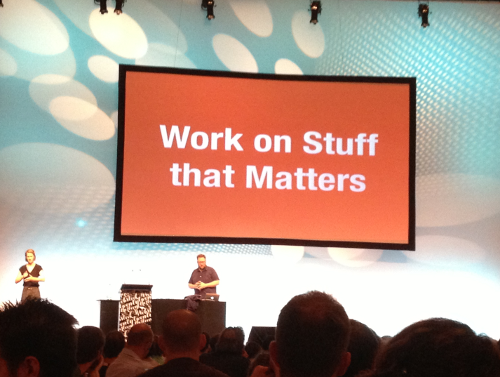 Clay Johnson is best known as the co-founder of Blue State Digital, the firm that built and managed Barack Obama’s online campaign for the presidency in 2008.

The fact that we know the name of at least one Kardashian but NOT the child poverty rate in New Zealand is because of the way we consume media. Pizza tastes better than broccoli. Opinion tastes better than news. Confirmation bias is the new H1N1.

It’s up to us to be responsible and create a more honest media. Clay says we should try to write 500 words first thing in the morning before checking email or Twitter. Consume with care. Stick to a healthy information diet and stem the tide of industrialized media. Your clicks are votes for crappy content. Produce rather than consume.

There isn’t room to be afraid, be open to serendipity. If you don’t get started, you won’t get started. You need adversity in order to change your goals. Ideas take the path of least resistance, and it is very easy to talk yourself out of something. Don’t talk yourself out of a good idea, treat it like a regular client, give it the respect it deserves. If that means sacking all your clients to concentrate on your passion, do it without fear.

Why make profits for your client when you can be creating opportunities for yourself? Trust your instincts.

Jason Kottke: I built a web app (and you can too)

Listen to your slow hunch. You can do it – things you don’t know how to do are documented. Creating is about showing up and doing the work.”Sit in the chair and do it.”

Key Takeaway: I built something that matters.

Aza Raskin – Design is the beauty of turning constraints into advantages

It’s not about thinking outside the box. It’s about finding the right box to think inside. It’s the box itself that matters. Context is important. Perceptual scope is crucial because perception is different for everyone depending on how you phrase a question.

Aza demonstrated this concept by showing us beautiful architecture created within extreme size constraints. One example was the architect who wanted to keep the tiny Hong Kong tenement apartment he grew up in and made it work by using sliding walls and panels to create 24 beautiful, functional rooms within a single tiny space.

The power of constraints is learning to choose the right problem. Constraints force us to overcome obstacles and create solutions. Find your creativity within contraints. 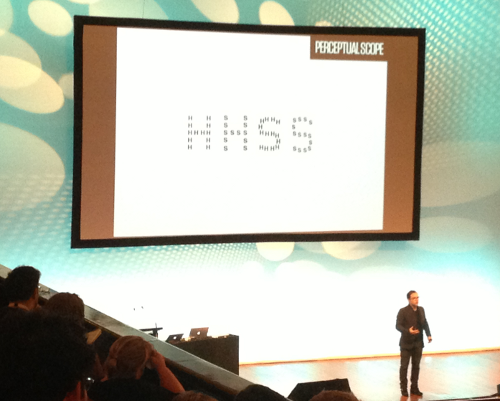 Aza Raskin on Perceptual Scope. Do you see H’s or S’s?

Miranda Mulligan – Your Survival is Designed

The work of the typical web designer goes well beyond pixel-pushing beautification and rare is the project that has no need for a designer. At one point or another, nearly all departments cross paths with “design” in order to conceive or execute a project, and the most successful ones engage a designer from concept to completion.

Therefore, the designer is uniquely positioned to be one of the most informed people in any organization, knowing most of the idiosyncrasies of all the moving parts.  Understanding our medium makes us better storytellers. But most journalists dont understand the Internet: Terrifying! Therefore, journalism needs more design thinking. 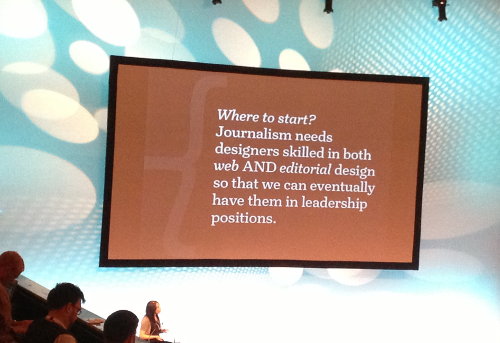 Artur Bergman – The Internet, performance and you — mysteries of a CDN explained

Speed is good, slow is bad – self evident. If you decrease your site load time by 1 second, you might half the bounce rate for your site. Make the Internet fast:

Although they were all brilliant, Kelli’s presentation was the one that probably inspired me the most.

We can all make disruptive wonder. The familiar face of a thing often belies the complexity of its underlying material (or digital) conditions. You should regularly “hack” your mindset and experience to find the hidden awesome. You should better understand how things work in order to demonstrate the surprising capabilities in the world, hiding in plain sight.

To demonstrate this point, Kelli showed us how she created a Fake New York Times and what happened when she distributed it to a bunch of people outside the NYT offices. People were forced to change their perception of the world for just a few moments and wonder “what if…?”

She also showed that you can take mundane, everyday items and make them into something magical. For her friend’s wedding, she made plain paper into musical wedding invitations. Paper became a completely different, unexpected medium with a little clever thinking and thoughtful design.

Key Takeaway: Use disruptive wonder to make stuff that matters.

Kitt Hodsden – Set yourself up to succeed

Many of the successes we hear about these days are the big ones, the ones that are most sensationalized, given the loudest voice or the most coverage.  What we often don’t hear about are the small steps that, over time, avalanche into those big successes.

Learn to streamline your digital work. Utilize digital shortcuts and the power of the command line in your day to day routine so you can make more stuff that matters in less time. 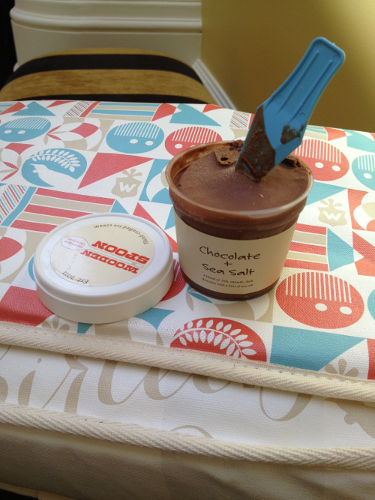 John Gruber – In Praise of Pac-Man: Lessons all designers can learn from the perfect video game

“You’ve done your best when people don’t notice what you’ve done” is an adage that applies to designers in nearly any field. Game designers have created a body of work that can serve as a model for all software designers, whether they’re creating apps, websites, or anything else.

In the first few years, Pac Man earned more than Star Wars. It was so successful it had a cartoon and song on the radio. John thinks Pac Man was successful because it was:

If it’s meant to be simple, you should be able to explain it in one sentence. Simple designs are often the most popular – complexity doesn’t necessarily add value. Keep that in mind when designing for the web.

Garr Reynolds – Story, Emotion, & the art of 21st-century Presentation — aka No Sleep Till Webstock

Garr talked about the importance of storytelling principles and how to evoke emotions in modern presentations.

Things that annoy us about presentations include :

Things that make for successful presentations include: 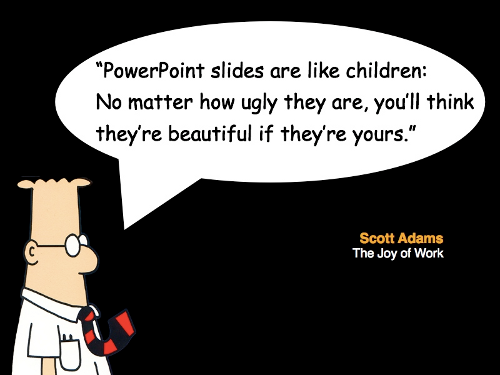 Powerpoint slides should be more like zen gardens – a few things are given power by the empty space that surrounds them. 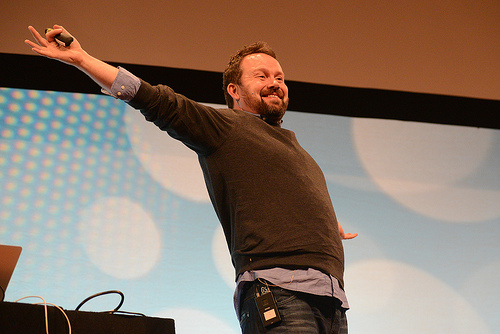 The way we think about the future is betraying our present. The goal is to demonstrate importance of tech, but they are overselling its power.

We need objects that are useful and practical, with an incremental value. We don’t need network computing, we can add value for 50 cents. Everything we need is sourceable from Alibaba.com. Imagine what would happen if any powered object over $50-100 was connected to the internet? What would that look like? What could we do?

Screw the impolite devices  – the fridge door alarms, the frenzied microwave beeps – instead, give me useful connected devices like fridges that tell me when I’ve run out of milk, or vacuum cleaners that tell me where the floor needs vacuuming. Sensor based door locks make sense but expensive Twitter-enabled Internet fridges don’t. We need connected computing devices that solve everyday, mundane goals and core functions. 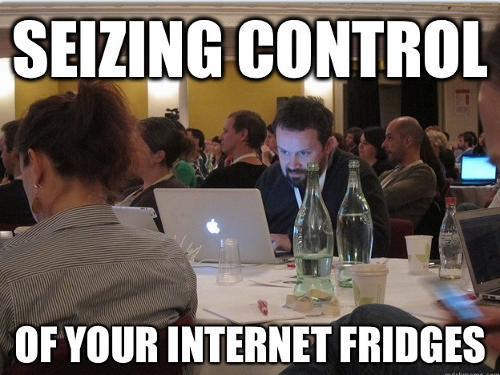 The Plotting Tom meme develops in response to Tom’s presentation

That was my summary of Webstock 2013 -Day One. My Day Two summary is over here.