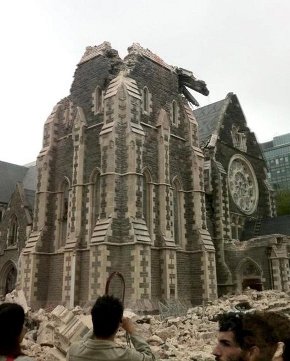 I apologize for the blog silence but I’ve been preoccupied with other things this week.

I don’t want to go into detail, there are hordes of media here providing that. But put it this way: my city has pretty much collapsed and I can see the quake epicentre from my house.

Will try to recommence posting regularly when life returns to some semblance of normality.

Thanks for your patience.

I recently had an argument with a fellow non-New Zealander who disagreed with me about how innovative New Zealanders are.

Me: “Look at that, she’s making a business from broken china. I love how innovative kiwis are.”

Him: “Kiwis are too isolated to be innovative.”

Me: “That’s total crap! How the heck do you think they became so innovative? They were forced to innovate because of tyranny of distance, to quote Tim Finn.”

Me: “Please tell me you’re joking.”

Him: “Ok, so name some innovations that came from New Zealand.”

Him: “Something not related to farming.”

Me: “The first iPhone app in the world.”

Him: “That’s not an innovation, that’s a dessert”.

Me: “A very innovative and complex dessert”.

And that’s pretty much why I’m here in Wellington this week. Webstock is as much a celebration of kiwi ingenuity and bravado as it is a web conference.

As I recently learned from the article Raising Webstock, the whole she-bang started out as a bunch of geeks meeting at the library to discuss web standards. This progressed into regular gigs featuring guest speakers, which in turn led to discussions about organizing a proper web conference to be held in New Zealand.

But organizers Mike Brown and Natasha Lampard were insistent that it should be less of a formal conference and more of a geek love-in where they could meet and mingle with Internet legends. Rejecting advice from important conference types, in true Kiwi spirit, they forged ahead with their ingenious plan.

According to legend (well @hadyngreen anyway) during discussions over a few wines one night, Natasha announced:

“Fuck it, let’s get Tim Berners-Lee!”

And get him they did. Berners-Lee opened the inaugral Webstock in 2006 via video link up and the rest is history. Serendipity may have played a role, but so did balls. This joyous combination has created the world’s best unconference that is now in its 6th year.

I don’t say *world’s best* lightly. I’ve attended bags of web conferences and I can assure you that Webstock is the finest of them all. You don’t attract speakers like Amanda Palmer, John Gruber, Ze Frank, Bruce Sterling and Merlin Mann without a radical reputation. And you don’t get speakers like David Recordon, Tom Coates, Amy Hoy and Michael Lopp coming back year after year unless you offer an incredible experience.

And it’s the experience of attending that I get the most from Webstock. Not so much the content of the presentations, although they are usually incredibly inspiring. But no, it’s the thrill of being part of something extraordinary that I cherish the most about Webstock. It’s the only conference I know of where the buzz starts at least a month early – or at least that’s when I feel the need to create a dedicated TweetDeck column for the #webstock hashtag.

Everything about Webstock screams Geek Cool. The barista coffee bar on site, the all-you-can-eat Kapiti icecreams, the grapefruit and lemon Frujus (a new addition for 2011), the Lego building stations, the massage chairs, the luxurious swag, the trading card game, not to mention the incredible after (and after-after) parties. Absolutely no corners are cut for this event and attendees couldn’t be happier. I’ve seen complete strangers high-five each other in the street when they spot matching Webstock gear.

This year’s programme reads like geek viagra. To top off the impressive speaker list, Mike and Natasha have somehow convinced Amanda Palmer and Jason Webley to not only deliver presentations, but also to provide a private concert *just* for Webstockers at the Friday evening wrap party. News of this was enough to make me pay a change-fee penalty and switch my flight home to Saturday.

Such is the prize of being a Webstocker that two Aussie IT guys, desperate to attend after the 2011 event had sold out, turned to begging online this week for help in sourcing the elusive golden tickets.

I feel their pain. I truly didn’t understand how very much Webstock inspires me until I had to miss 2010. I could only watch jealously from afar, scanning the tweetstream, trying to understand the back channel jokes, hanging out for twitpics from the ONYAs, oohing and aahing at the dodgy YouTube version of the amazing $40K light show I’d missed. I was absolutely GUTTED not to be there. And I think my level of guttedness made me love Webstock even more.

So hand me the pavlova – I’m back for the love-in.

This week, I’m in Wellington for Webstock 2011.

Webstock has a reputation for having the coolest conference swag around. The question is, can they match their previous swag reputation? The answer? Yes they can: 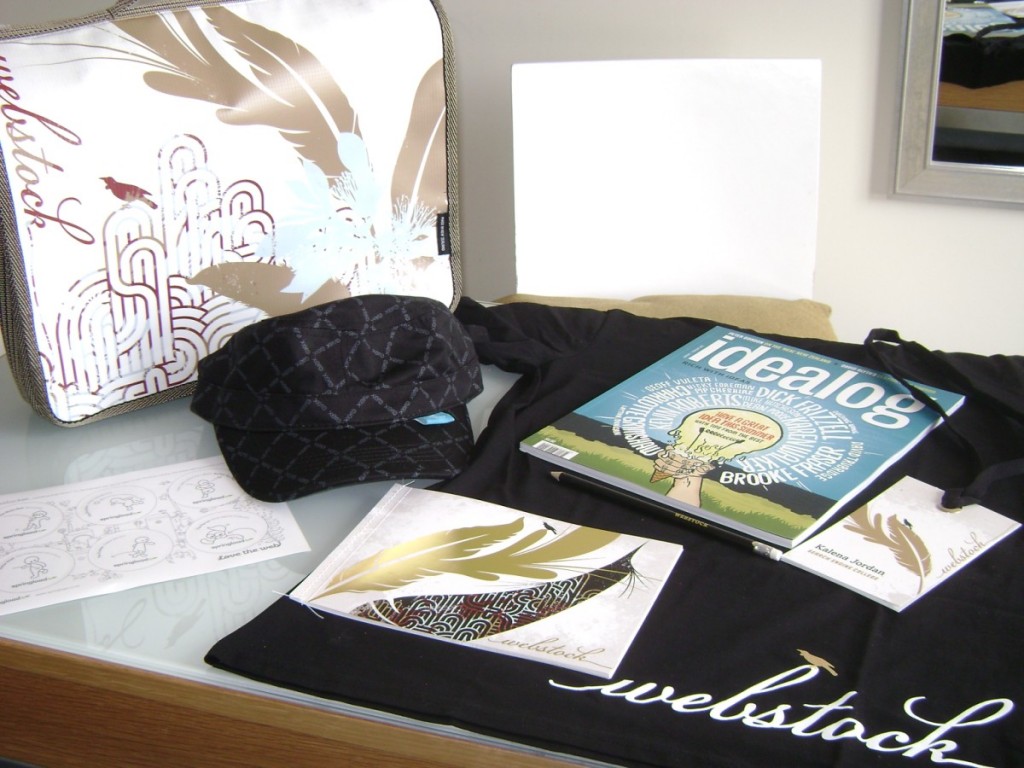 All in all, a pretty sweet swag. Topped only by Webstock 2009 when we all got keys which we had to exchange for matching wind-up robots. I hear we’ll also be getting Webstock Trading Cards on Thursday so we can all play the @webstockgame.

But it’s not just about the swag at Webstock. The conference hasn’t even started yet and as always, the buzz is palpable. Jealous much? 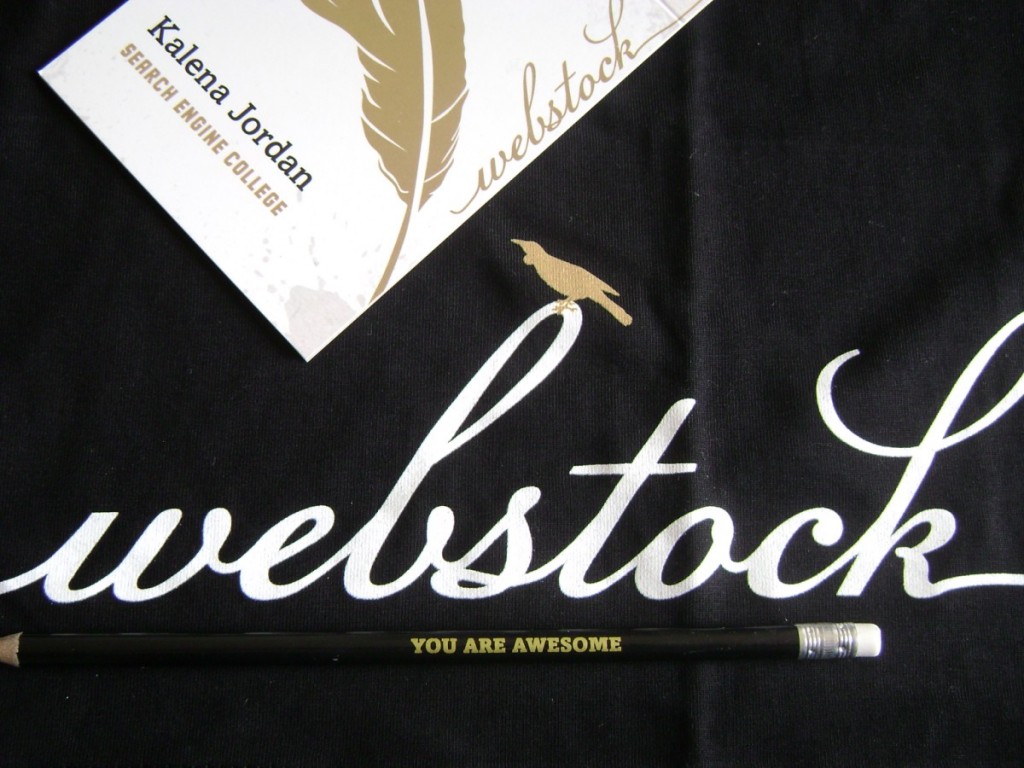 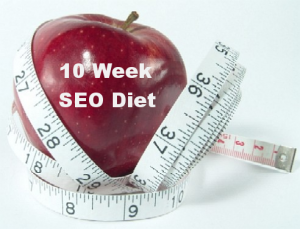 I have a regular blog writing gig over at SiteProNews and sometimes I write feature articles for them about Search Engine Optimization and social media.

This week, I wrote a piece about SEO after receiving several question submissions from webmasters who were struggling optimizing their sites. The common thread amongst these questions was:

“There is SO much conflicting information out there about SEO – what are the basics and where do I start?”.

I decided to write an article outlining 10 vital, yet simple steps that webmasters can implement themselves to improve the search engine visibility of their sites. But to make it less overwhelming, I wrote the steps as a series of weekly tasks over a 10 week time frame.

I know how time-poor  webmasters can be so — just like starting a new diet or exercise plan — the 10 Week SEO Diet introduces the concept of SEO into your routine slowly.

I hope you enjoy the 10 Week SEO Diet. You can also view the YouTube version.

Last night, McDonalds New Zealand decided to launch a Twitter account via @MaccasNZ. According to their first tweet, the move was to copycat their competitors Burger King and Subway:

I noticed their account this morning and decided to follow to see how such a major brand would proceed to dip their toe into the Twitterverse. It was like watching a train wreck.

The launch failed on a number of levels:

1) The first tweet basically said they’re only on Twitter because their competitors are. Sorry but the *Me Too* factor is not reason enough to get excited. Neither is “Follow us for cool stuff!” Yawn.

2) Their second tweet was grammatically incorrect: “Wanna win with McDonalds” (missing a question mark). Also, win what? Ok, these are pretty minor issues, but you’d think such a major company would assign somebody with a better grasp of English to represent their brand, wouldn’t you?

“I think it’s time for McDonalds”

4) However, it was their fourth tweet that really scratched FAIL into the golden arches:

For those of you reading this unfamiliar with the #eqnz hashtag – it stands for Earthquake New Zealand and it was adopted following the 7.1 magnitude earthquake we had last September. As anyone who lives in Christchurch will tell you, we feel a certain ownership of the #eqnz hashtag and do NOT appreciate accounts that use it to spam or promote non-earthquake related content.

After @MaccasNZ included the hashtag in the above tweet, Christchurch-based tweeps became quite vocal about what they saw as blatant abuse of the tag:

Then @esoap tweeted: RT @MaccasNZ Shakey town Christchurch I think you could do with some McDonald’s #eqnz * MCD use twitter to spam earthquake thread in NZ

And just like that, New Zealand’s most recognized brand offended their audience. During their first 24 hours on Twitter.

5) Not to be outdone, their 5th tweet reveals they don’t know the difference a possessive and a plural: “Grab one of the McDonald’s dinner box’s tonight”. (Thanks @ThisCJ for pointing out this one!).

Apart from the fact that it has taken the NZ arm of this major brand so long to embrace Twitter, I’m curious as to who they have running their account and whether that person has any solid experience on Twitter. They certainly don’t seem to have twetiquette. Nor do they seem to have a grasp of English grammar.

Somebody just pointed out to me that the account is not verified, so perhaps this isn’t an authentic account. But, if it is (and I’m checking), the brand has gotten off to an awful start. Even if it isn’t verified, this would appear to be a case of brand-jacking that has gone unchecked for more than 24 hours. Neither is a great scenario. McDonalds seem to be having better success with their Facebook account though.

Let this be a lesson – don’t trust just anyone to represent your brand via a Twitter account. It’s not the job for some junior staffer and it’s not the job for your PR department. Marketing staff might be the obvious choice, but you need to find someone who is social, has experience in the medium and has a solid knowledge of your business and target market. Whether that person is internal or external staff doesn’t matter, in my opinion, as long as they’re the right fit.

Postscript 1: The consensus is that this is NOT an official account endorsed or created by McDonalds New Zealand. I’ve tracked down the Twitter accounts for McDonalds marketing and both @McDonaldsCorp and a representative of McDonald’s advertising agency in New Zealand have both denied the account is official and claim to have known nothing about it.

Postscript 2: On their Facebook page, McDonalds New Zealand has publicly responded to my question about @MaccasNZ with the following statement:

“Hi Kalena – nope, that’s not us, but thanks for alerting us – we’re looking into it.”

So there you have it folks. A brand-jacking it was – but instead of satire, the purpose of the @MaccasNZ account appears to have been legitimate promotion that has backfired. Will be interesting to see if they manage to shut it down or replace it with an official account.

Postscript 4: Turns out @MaccasNZ *IS* an official account for McDonalds NZ. Two new tweets today reveal the true story behind the account:

“Sorry we got off on the wrong foot. We are a McDonalds franchise acting on behalf of McDonalds New Zealand.”

“Also we are sorry for the mistakes in our tweets, New to twitter and letting certain staff use the account = not a good idea.”

They’ve removed the offending tweet containing the #eqnz hashtag, as well as the one containing the grammatically incorrect apostrophe. The profile for @MaccasNZ has been changed AGAIN to read “A twitter for McDonalds to communicate with its followers from New Zealand.“

So as I suspected, these were the actions of a well-meaning franchisee who created an official account without official permission and assigned the account to an inexperienced staff member.

Great to see them reveal the true nature of the account and fess up to their social media FAIL. Hooray for transparency and well done McDonalds New Zealand for following up.