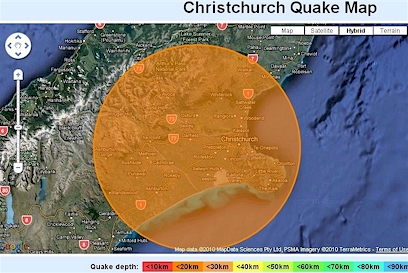 It’s been an intense couple of days here in Christchurch. If you’ve had access to major news agencies like CNN or BBC, you’ll already be aware that my beautiful city suffered an earthquake at 4.35am on Saturday morning, 4 September 2010.

The quake measured 7.1 on the Richter scale and was only 10km deep, making it the most destructive earthquake in New Zealand since the 7.8 quake that devastated Hawkes Bay back in 1938.

Unbelievably, there has been not a single loss of life. This has been put down to the timing of the earthquake, when very few people were in the city centre where most of the damage occurred.  Most of us were in our beds, sleeping peacefully, only to have our slumber completely shattered by our houses twisting and turning under our feet and objects falling onto us in our beds. It was, without a doubt, the single most terrifying event in my life.

So many people have escaped injury, even as their houses have crumbled around them. We were lucky in that our cement block house remained completely intact and structurally sound, despite cupboards flinging themselves open, books falling off shelves and cabinets toppling over. As we woke up to the devastation to friends’ houses and beautiful historic buildings of our city, we became so very aware of how lucky we were and how grateful to still be here to talk about it.

Aftershocks are still rocking the city every hour or so and each one brings down more parts of already damaged buildings. But as a whole, our city is SO VERY LUCKY. It could have been so much worse if the earthquake had occurred even a couple of hours later. I write this post mainly to let people know I am ok, my family is ok and our businesses continue to run. For Search Engine College, it’s business as usual, although students may experience delays in assignment grading as Internet access appears to still be sketchy. Blog posts here will resume shortly also.

A very big thank you to those of you who have emailed or tweeted me messages of concern. I’m so touched, particularly by those complete strangers who have been long term readers of my blog and just wanted to reach out and let me know they were thinking of me – I really appreciate it.

I have been tweeting about the quake since 20 minutes after it happened and I’m not alone. With no power, water or radio, Twitter was our lifeline to the outside world after the quake. To me, one of the most interesting aspects of the disaster was the use of social media. I’ve been collecting the first 3 tweets from people after the quake and they’ll be the subject of a future blog post. What were your first 3 tweets after the quake? If you want to contribute, please @reply me links to them at @kalena with #firstthreetweets as your hashtag.

[UPDATE : Read the First Tweets After the Christchurch Earthquake]

Meanwhile, below are some earthquake resources that you might find interesting:

How You Can Help: